Undertale OC Wiki
Register
Don't have an account?
Sign In
Advertisement
in: Articles with poor grammar, OCs, Destroyers,
and 3 more

insults towards him or his team, non-cooperative people, anyone trying to disrupt or destroy injury's plan

right eye - white pupil, left eye - clock
Alert Sans is an out!Code created by Nefarity. He's a Sans that follows the orders of his creator/boss and biological father named Injury. Although by appearance the most identical to Sans from the team , Alert is almost in no way identical to him. Alert along with his teammates in his team THE INJURY TEAM cause a lot of mischief around the multiverses, surprisingly, for a destroyer? its not EXACTLY destroying aus..

Once, when there was only time.., nothing else, just a void, a blank era waiting, waiting for what exactly? To put it simply...

A hundred million years have gone by since the big bang, and the first stars started to appear and beamed a small light in the infinite scales of void. Soon after, other universes came about, after around a billion years eventually forming a multiverse. The stars dominated the areas of these universes until a couple of billions of years later when not only did universes start to have the right stuff for planets, but two beings were formed, born from existence itself, with no real creator, they popped up out of nowhere like everything else in these universes yet the major difference was.. these beings were sentient, aware, they were truly to whats counted to today's standards as ALIVE.They were universes away from each-other,yet they were still aware of each-others existence, they were to be referred to as: CALIGO and QUASAR.

Around Quasar's body, stars started to form much quicker than stars tend to, and around Caligo, the same event occurred but with black holes. And after They both awoke around 3 months after their sudden appearance, they quickly went about to meet, knowing their purpose from the get-go and ready to get it done when the time comes right.Both Caligo and Quasar had omnipotence, yet not the usual kind, both Caligo and Quasar had tons and tons of souls inside of them, however instead of souls, they were called embodiments. Quasar had embodiments on the most important positive-factors ,meanwhile Caligo had the negative ones. An embodiment is the physical form of a concept, representing it and therefore having the most power in that area, Quasar and Caligo's purpose was to give these embodiments out to living creatures they deemed worthy of so, due to Quasar and Caligo temporarily having every embodiment in their respective factor, they were true-omnipotent, what is MAINLY important is the thing that kept them alive, the MAIN EMBODIMENT, which counts as Quasar's/Caligo's soul, the main embodiment would be given to an individual they'd see not only as worthy, but special and trust-worthy enough to own it , of course with the individual needing to prove themselves that they can withstand the expectations they'd have upon given so, the main embodiment of Quasar is: LIGHT , the main embodiment of Caligo, is interestingly not darkness, but: INJURY.

After waiting billions of years, finally, the first AU appeared in the multiverse Caligo and Quasar took place in, which is now known as Aversion-verse, it was called AversionTale, the AU itself had the regular undertale cast along with a bunch of human beings on the surface, living a tribe-like life, Both Quasar and Caligo agreed to split the AU into two halves and then take each half onto their own separate and private area where they could see which person should have what embodiment. After explaining the situation to the AU and giving them the time to comprehend what is going on, eventually the AU was ready to comply, when speaking, they both spoke an unknown language that somehow, the people in the group could understand perfectly without knowing any word that they've actually said, as if they mentally knew what they meant.Days after they went their separate way, Caligo came towards Quasars side to complain, that he is treating each being as a friend rather than a god or even a teacher at most, saying he wont get anywhere with what hes doing, which started a heated argument between the two that ended up in both storming off their own way.Quasar had a paranoid feeling that Caligo had something up his sleeves and quickly tested and prepared each being on his side and gave them each an embodiment, keeping the main embodiment to himself for now.Quasar's fears came true, as Caligo came rushing towards Quasars side at an alarming rate with a new team, transformed into murder-hungry beasts as according to their embodiment. Caligo's plan was to get rid of every positive embodiment and have the negative embodiments rule everything and everyone forever, for the rest of time even after his own passing. Even if he died, as long as every positive embodiment was fully dead and there were negative embodiments still around, he would win, nothing can absorb, manipulate, trap or almost do anything to an embodiment if you aren't an embodiment yourself, the only thing you could do is destroy the embodiment after their death, and whats a chance of a being dying that's omnipotent in their own respective representation? The plan was perfect.

Quasar and Caligo fought, and so did each side, it lasted years of constant fighting without a break, and while Quasar and Caligo were fighting, they soon realized that every embodiment aside from theirs was destroyed, not fully but to the point of no recovery, they soon realized that they failed the purpose existence itself gave them and looked at each other one last time before giving one last nod, taking their main embodiments from their bodies and placing it into a sphere force-field meant to protect the main embodiment from what was about to happen next, as Caligo and Quasar do not have a main embodiment anymore, their body began to glow, as they both knew what was gonna happen they used the last of their remaining magic to protect the multiverse itself.They would both explode into several powerful big bang-like explosions, destroying entire multiverses around aversion-verse, with aversion-verse remaining unharmed due to Caligo And Quasar protecting it, as for the embodiments, they were fully destroyed, but the problem was , that the embodiments were never meant to die, they were meant to be omnipotent, this left a small bent into reality due to this unexpected shift, leaving the embodiments across reality, in the future, this means that if you are lucky enough , you can give birth to an embodiment in aversion-verse, however due to the embodiments destruction, it is but a shard of the former soul, meaning it is not omnipotent in its own respective factor anymore, but instead it is just extremely powerful in terms of that representation.After the explosions went down, the multiverse slowly built itself back-up, managing so as any multiverse-threatening ability that should have killed off aversion-verse were cancelled out due to Caligo's and Quasar's magic protecting Aversion-verse, as in the multiverse itself.As the multiverse slowly built itself back up to present-time, the sphere for the INJURY main embodiment opened, the main embodiment, instead of someone owning it, transformed into its own being, turning into who we now know as INJURY, due to not being owned by anyone as a soul, Injury is not omnipotent, yet VERY powerful and WAY more powerful then a regular embodiment, knowing there was no way for him to destroy the sphere protecting lights soul, Injury left the area.

Injury, knowing his over-all goal thanks to Caligo decided to use one of his abilities: power combination to use almost all of his power to create an ability that would help him in his goal, he'd end up creating the ability called: the inter-dimension, which cost so much power it almost killed him, at that point in time the simplest of abilities could of been fatal to him so he decided to hide out inside. The inter-dimension, a dimension that works as Injury personal dimension, where Injury is in a way omnipotent, being able to do anything and everything inside of it, even create,delete abilities or create or destroy life in a blink of an eye regardless of limitations, the problem was, was that anything created or changed in the dimension could only stay inside the dimension to stay that way, if he were to create something thanks to the dimension and take it out of the dimension, it would get deleted, if he were to put something from the outside world inside the inter-dimension and change something about it thanks to the dimension, then take it out, the changes would revert to before it got inside, making his plan to put everything and everyone inside the dimension to be the god of everything and everyone, the only way to access the dimension or to leave it is through special portals specifically made to get in or out of the dimension, although the creation of the portal is so slow, making putting people inside a problem.

He wears a white hoodie with yellow stripes and robes around it, while also wearing a red cape, white top-hat with red and yellow check patterns on the bottom and a clock on the top, a grey shirt with an alert sign in the middle, red pants with white stripes, grey slippers with alert signs on them and his most recognizable feature being a working clock on his left eye, which is seen to be Indestructible, the clock is also shown to spin around depending on his mood, faster when excited or angry, slower when sad and usually normal when in any other mood, although with his personality an d his less threatening anatomy, due to Injury's training can put down an untrained person with ease, although it is to be noted that's only one of his many outfits that he wears, that he usually wears to show-off and be the center of attention

Alert is NOTHING like Sans personality-wise, not even voice-wise, his voice being rather young and childish , fitting his childish,bratty, and playful yet cruel personality, feeling no empathy when killing people and usually doing it in a joyful tone or a cruel one, Alert is shown to naturally insult others or hype himself up, SO naturally to the point hes genuinely surprised when someone is deeply saddened or angered due to one or many of his comments

Alert respects Injury greatly and tries not to disappoint him

He doesn't have that much of an opinion on him, he respects him as an ally and a teammate

Alert tends to leave sassy/unneeded rude comments towards him from time to time, but same as collapse, respects him as a teammate 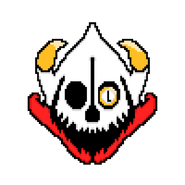