The AlphaVoid Is A Blessing, Too Bad You'll Never See It...

AlphaVoid!Sans is an Out!Code created by Void485. He's one of monsters that was banished to the AlphaVoid by the Humans of his AU after they found out Asgore's means of breaking the barrier. Even after a good fight, the humans once again won, and the monsters were banished to the Alphavoid. Little did the humans know, the monsters would gain immense power due to a large crystal in the center of the Alphavoid. The power from this crystal resonated with sans the most and allowed him to leave his own timeline and visit other AUs.

AlphaVoid!Sans was created after the human dies to Asgore in the true pacifist timeline. Asgore can't lie to the monsters anymore, because he told them he needed 7 human souls, so he broke the barrier and let the monsters free. The humans did not appreciate his means of freeing the monsters, and they started a second war. Due to the large number of humans, the monsters once again lost quickly, quartering their population, and were banished to the AlphaVoid. The AlphaVoid is a large anomalous area centered around a strange crystal, with familiar parts of the underground floating around it. The monsters slowly inhabited and adapted to their new surroundings, and sans and Gaster took part of the crystal to their lab. As research went on, Gaster found out the crystal was dangerous and attempted to find means to remove it. Sans, however, got more attached to the crystal, and Gaster often found him just staring at it, with the lights turned off, silently. This was not normal for Sans, so one day, Gaster confronted him. It was too late. Sans was corrupted by the crystal and attacked Gaster, killing him. Sans went out of the lab and went on a genocidal rampage, possessed by the crystal. With the combined power of him in the crystal, he wiped the underground empty. Once he regained control, it was too late. With the power from the crystal, he left his AU, and all the bad memories behind with it.

AlphaVoid!Sans is a grey skeleton with a black jacket and a red shirt underneath. His shorts are also black, with red stripes. He wears white and red shoes with black soles and crossbones on them. His eyes glow bright red or dark purple. His crystal form, however, has purple crystals appear on different parts of his body such as his shoulders and knees, and when fully crystalized, he is surrounded by a crystal shield.

He has a immense fear of loneliness, and tries to stay social with whoever he can, sometimes scaring those away in the process. But when he is alone is when he is the most dangerous. In battle he is confident and does not back down from a challenge, even if he is a bit overconfident. He is very protective of those who have befriended him and will protect them with his life. However, his crystal form hates all lifeforms, but is sneaky about killing, or hurting them. He will let AlphaVoid think he is safe, and he will make friends. When the friendship is built up the most, he will tear it down. 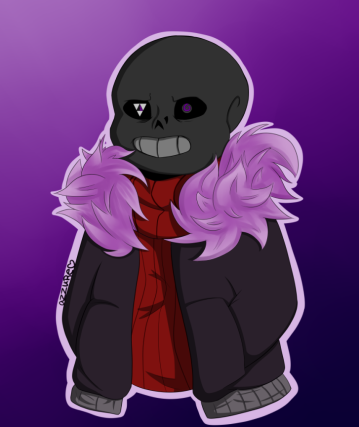