Red and █████
Alpha Computer is an OutCode made by Mysware, When the first universes were created, the combination of garbage software where garbage software was thrown was born on the same day with his brother. After destroying the universe, he retreated to the infinite white void called Main-Desk and it grasped and strengthened a lot of things thanks to a foreign computer there. He's helping his brother and collecting information.

When the first AUs were being built, empty software that nobody cares about was thrown into trash bins and cleaned, a realm was created to prevent these garbage software from falling apart and started to be thrown there. After many years, many of the countless infinite unnecessary software began to rebel and unite so that they could be saved with a single body. But something went wrong, after the merger they turned into a very strange creature and tried to separate, even if it was painful, they finally managed to leave but not quite. Thanks to this, 2 different creatures were formed and they were organized, but now they had a single will instead of the free will of software. Two of them looked at each other, one of them had a lot of warning signs around him, and his eyes were warning signs and green, wearing red, and the other was whiter and one eye covered like a fence, the other was faulty. They were afraid of each other, but then suddenly they screamed, they both started shouting about freedom but did not know the way out. The two bonded quickly, but there were personality differences between them; The red creature was more hasty, hating its past and thinking darker, while the white creature was more optimistic and naive. After more conversation, they began to test their strength even when they tested on each other, the creature in the red suit had already grasped very well, but the creature in the White suit was more inexperienced. In the end, they thought of a name for each other; the creature wearing a red suit would be called "Software Breaker" and the creature wearing a white suit would be called "Alpha Computer". While this was happening, Software Breaker began to contemplate and discuss their past lives, Alpha Computer understood him but found him wrong, yet he did not want to say his wrong discovery because in general he does not want to break Software Breaker's heart. Within a few weeks they decided to get out of the Trash, Software Breaker would go first because they don't know what dangers await them outside. Software Breaker managed to come out.

Tired of waiting for his brother, Alpha Computer felt as if he had been waiting for years and decided to go out, tried to teleport to a random area, but at first he was forced to not master this feature as much as his brother. He managed to teleport using more power. He opened his eyes and started to examine the surroundings, there was so much stink around for no reason, and he stood up, as if he was in a room and the surroundings were so bloody. He stood up and headed for the door, but suddenly he began to glitch and fell to the ground. His head was hurt so badly and he couldn't control it and he was crawling around until the door opened. He was in front of him with a long skeleton with very poor dental care, and it was weirdly terrifying. Alpha Computer stood up and was staring at the skeleton. The skeleton screams Sans for no reason, and this started giving Alpha Computer a headache. The skeleton approached Alpha Computer and, while he was about to reach out, Alpha Computer looked at him, and a ray from his right eye unintentionally fired at the skeleton and turned to ashes inside the skeleton. Alpha Computer shouted quickly and started to run away, he fell down the stairs and just as he opened the door, another skeleton opened the door, he had a huge ax in his hand and was staring at Alpha Computer in a terrible way. When the Computer pushed him aside in fear, terrible luck fell to the ground and seemed to be in pain, as he shouted and shouted for help it began to turn into stone at his feet, and when the whole turned into stone, he broke and died. Alpha Computer didn't run away or react, it just started going soulless. These deaths were trying to tell him that the strong survive, the weak are crushed. He was now able to control the beam coming out of his right eye and was using it to destroy the AU, he managed to pierce even the space in the universe with that beam, saw himself as extremely powerful and began to destroy the universe.

After the Universe was completely destroyed, the Alpha Computer had changed a lot, deleted theuniverse completely. He then teleported back to Trashvoid, and while he was waiting for his brother he began to think about what he had just done, and he began to enjoy it, which was his destruction. While he was thinking, looking up in the air, a portal suddenly pulled him in. He suddenly fell into a white field and immediately stood up in a hurry. It was an endless white space around, he thought it would waste time, and a computer appeared behind the Alpha Computer just as he opened the portal. When he turned around, he was writing an incomprehensible language on the computer, as if he was pulling Alpha Computer into it and Alpha Computer was getting closer to the computer, and when he finally touched the computer screen, there was a huge explosion and the Alpha Computer blew up. Alpha Computer started to feel very different and stood up and it seemed as if he were aware of life ... no, everything about himself and even fiction. He began to examine his own hands, feeling strangely different. The computer had disappeared, and he thought it was gone by the explosion. He stood up and felt that he was connected to it right before he got out of here, as if the source of energy was here and he could shape it here and control it as he wanted. He was the computer energy representative now, and he knew that too. He chose this place as his own realm and was eager to tell his brother about it. He quickly entered the portal and was in Trashvoid, his brother had already arrived. That day, both of them decided to destroy this free software together after telling about the events they had experienced.

Alpha Computer has an outfit choice between White and Gray. His eyes are red and the surrounding area is red, with red strings running from his eyes. His right eye is covered with bars and his left eye is covered with glitchs. He has red teeth and his mouth is wider than other people. surrounded by error symbols and glitchs.

While Alpha Computer was fairly calm towards his brother, he began to deteriorate and follow his brother's path as he got to know the other universes. He is mad and crazy for others now. He sees the universes as nothing more than a garbage to be thrown into the garbage can. He will mercilessly destroy everything that opposes him and forgive anyone who does not oppose him. In fact, he is a good person, but there is no trace of his personality anymore.

He has never met Anti-Code, but he hates him in keeping with what his brother says

Allies with the Omnibreaker in the breaker squad, their relationship doesn't go further than that.

Allies with the Alpha Breaker in the breaker squad, their relationship doesn't go further than that.

Alpha Computer accuses Ink of protecting useless software so he hates him, we'll kill him wherever he sees it.

When he met Killer Sans, he made him a puppet to be a puppet. For fun.

Fatal_Error tried to steal Alpha Computer's codes, but this effort was in vain. He bit Fatal_Error to pieces and eventually killed him.

Infinitey Code's executioner. Alpha Computer just looks at him as a Half-boss, but he doesn't really see him as a real boss, he's more the pleasure of spending time.

Helps to Mother Virus for control viruses, their relationship is generally good. 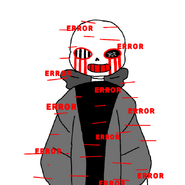