People who don't take him seriously

A little taller than Sans

Ashura is a Original character created by AshuraSans. He’s the second human to fall into the Underground, as a means to escape the harsh life bought on to him by the others. Shortly after, he was adopted by Sans and Papyrus. They also in possession of mysterious powers of creation.

Ashura was a human born above ground. At a young age, he wanted to be somewhere else, other than the "dark world," which was what he called above ground. Ashura hated his parents because he felt as if they would not let him go out into the real world, although he was too young anyway. He didn't care. He mostly left the house by sneaking out every night. Ashura developed an imagination.

Ashura had only one friend who he loved dearly. Everyone else in the world he saw... "You're nothing. I bet you're lying to me about being my friend, aren't you...?" His friend died on the day that the war was happening. Ashura didn't swear revenge on monsters, but instead just...."forgot them all."

Ashura was also the second human to fall in the Underground. Like Frisk and Chara, he, too, climbed Mt. Ebott and fell. But when he fell, Ashura didn't land on a pile of flowers. By his "power," he landed on soft ice.

Ashura starts to walk through the Underground, scared. He never slowed down, which is why when he reached Snowdin, he collapsed in snow. Sans was walking when all of a sudden, he spots Ashura lying in the snow, sleeping. He notifies Papyrus when he is in Royal Guard training that he will be bringing a "surprise" to him later. Sans carries Ashura all the way to his house.

Ashura wears a gray jacket with gray shorts. Everything on him is gray and black. When he became Sans and Papyrus's brother, he started loving blue and orange.

Ashura is basically somehow infused with Sans and Papyrus's personas. He's laid back and also energetic. Ashura also loves when people are straight-forward with him. Otherwise, he doesn't really respect them.

Since Sans was the one that actually took him in, Ashura has grown really close to Sans. In fact, he is so close to Sans that he has even gone to the point of calling him "dad" or "daddy." Sans loves Ashura back, but he doesn't approve of him calling him his dad (mostly because he secretly thought it sounded like Ashura was a homosexual, which he was not). However, there are some times that whenever they were all alone, Sans would even call Ashura his "son," and he allowed Ashura to call him "dad." Ashura never really calls Sans "bro" or "brother." But he calls Papyrus "brother."

Sans - When Ashura first saw Sans, he was afraid that he might hurt him. But he grew closer to him and loved the ever loving heck out of him not only just because of his puns, but because of his personality. This is when Ashura wanted to call Sans his dad. Sans mostly liked to be called dad whenever he and Ashura were alone. But whenever they were in public, Sans wouldn't like it and would prefer to be called "big bro." Ashura also calls Sans "skulldad."

Papyrus - Even though Ashura is closer to Sans, he still loves Papyrus and even encourages him to keep working in order to join the Royal Guard. Ashura doesn't call Papyrus "dad", but instead calls him "big bro." Papyrus also seems to find it weird but also funny that Ashura calls Sans his father. 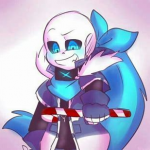