Undertale OC Wiki
Register
Don't have an account?
Sign In
Advertisement
in: Pages without a standard infobox, Articles with poor grammar, OCs,
and 4 more

Awaken!Sans is an OC Moderator created by GalacticRanger224. He was a Caretaker in his natvie AU, until he was betrayed by the Genocidal Human. After slaying said human, he now resides in the dimension where he monitor AUs, with the simple yet determined goal to kill all humans.

It’s a beautiful day outside, birds are singing, flowers are blooming, and regret never seems to go away. In fact it was a beautiful day outside; all the monsters were happy as can be, then a human fell, but instead of Toriel, sans found him, and let him into the ruins, teaching him how puzzles work and built a bond together, but the human was interested to what was beyond of the ruins, sans was hesitant, but he warmed up and said if you want to see, well follow me, he lead the human out of the ruins into the Snowdin, the human was happy as can be, and Asgore said if it was ok, he would take care of the child.

....in the morning sans woke up to... dust, blood, he was horrified, he ran around checking to see if there were any who remain, but... none remain, but while he was looking, he saw the most excruciating thing, he saw papyruses head Turing to dust in front of his eyes, tears covering his face. With his last moments of his life looking at sans cry as he dies. He tries to find the human but it's too late he kills the last monster in his face, and looked at sans, full of blood lust, then the human speaks, “to complete the utterly useless universes I have to kill you but don’t think that’s all I will do, I will create a hell for you, why you ask... for fun.”

Then the human slashes sans and his vision went dark but woke up the same morning and the same thing happened, but papyrus died differently, but his skull was crushed to tiny, little, small, bits, of, Dust. But no it was not enough, watching papyrus die two times was not good enough, days, or even years maybe decades of watching papyrus die. Then the human finally got bored of all the ways he could kill papyrus then sans finally awoke to the idea who cares if someone dies its all the same, the regret this twisted human left me, he thought to himself, I'm the one who let this human in, I let him take advantage of us, Papyrus! Watching him die was the fun for the human, in all his twisted ways. But one goal was in mind when all of this happened, kill humans, they are disgusting creatures who like to kill for fun, humans are the problem not me, HUMANS...MUST...BE...EXTERMINATED. Then there he went killing humans from each and every universe out there gathering human souls to become stronger, and to decimate humankind. Becoming what he is today. He finally awoken to the truth!

He is disgusted himself for what he had done to his home. He usually took his angry off on humans but later he learned not to, he is sarcastic, likes comedies, lazy-ish. 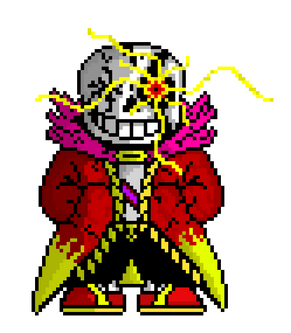 He can stay in this form for up to 30 minutes but if he's max potential then he can be like that for 2 hours.

ink and awoken met when ink wanted his help to fight error and free the au's from his grasp, so they went on a journey together.

ink stopped by to get outer sans and awoken and outer met and helped defeat error together.

awoken met him when they tried to free the au's and awoken got attacked so he could only free fell and swap, and fell carried on with the journey with awoken.

Like fell awoken freed swap but got attacked so he could not free every one, so swap went with them to defeat error.