Broken!Sans (Fracture in Underverse) is a Sans variant made by Brokentale-shatteredsouls on Tumblr (ShatteredGlory On Twitter) and one of the main Protagonists in Brokentale. It is a variant of Sans after a post-genocide route that Frisk (the player) never came back from. He takes care of Broken!Papyrus (Shatter in the Underverse) who is mentally disturbed. After he tried fixing the machine to reset, he accidentally brought his Gaster back from the void (Severed in the Underverse) He later created a group to guard AUs that are frequently in danger.

Fracture came from an AU stuck forever in a Post-Genocide with only him, his brother, and his father. He's one of the last 3 living souls in his AU; despite everything he ever did to try and find Frisk or reset the AU, it never worked and he eventually gave up hope.

Eventually, he and Shatter found out that when his machine brought back Severed, that when it blew up they absorbed the artificial determination that he found in True Lab from the explosion and could travel through different Timelines and AU's, opening portals with their SOULs.

So, he began a group of those with good intentions to guard AU's and other characters from those threatening their lives (E.x guarding Swap!Sans from one of the killers, etc). Shatter decided to name it AU guardians, and that's their new jobs, but his brother discovered a mirror world in his full-length mirror with reverse versions of themselves, so he turned on Fracture, vowing to destroy every AU that got in his way. He met Vino, and they are trying to save the underverse from Lithograph and Shatter.

Fracture is a 5'3 skeleton with a shattered eye socket (the broken eye socket still has a glowing white spot), and multiple fractures throughout his body. He wears his normal outfit like Classic!Sans, but its ripped and torn. Blood stains his outfit and one of his teeth are missing. He's 26, 8 years older than his brother Shatter.

He carries tranquilizers in his right pocket and rope in the other in case his brother lashes out at someone.

Fracture is a jumpy, and very enraged version of himself. Although, when nothing is brought up about Frisk, he is pretty chill and lazy as he is used to. He loves science and building things, and encourages people to try their best when doing things.

He can tend to lash out at people who startle him, or bring up his human; swinging at the victim with spiked arms of bone. He is afraid of knives and children in striped shirts. He can rage easily sometimes, or even have panic attacks when he sees people holding knives and blades. (Aichmophobia)

Sometimes, he is able to pass through walls and floors, and goes to sneak up on, then go for head-on attacks against his enemies to start dealing damage before he gets hit himself. He can take a bit of a beating, but is always being protected by Severed's magic so he can't really die. He likes to mock and imitate his enemies, and sometimes likes to imitate a leader of a group to lead the members off somewhere to have a better chance of victory.

As long as his SOUL is not damaged, he is able to use magic like:

Fracture's dear brother, they had a really close bond when they were younger and being tested on by their father. They used to do everything together, by running around and going to sleep together, they were always by each other's side no matter what, until Shatte

Fracture's father. Was there for most of his life and took care of the boys, but did do some experiments on them to test DETERMINATION on artificial monster souls. He took care of them, until he was 12 and Shatter was 4, when he fell into the core and was shattered across time and space, being erased from existence and ultimately forgotten forever; Fracture keeps a picture of the three of them to never forget. He was brought back by Sans with a mistake from the machine in his lab.

Had to bodyguard him once against a possible threat, and became acquaintances but never really friends. Only fought together once against Error and Nightmare.

Best friend and comrade. They fight against Lithograph side by side and never give up. They met when Fracture woke up and brushed his teeth in front of the mirror. He appeared and knocked on the glass, causing Fracture to fall backwards in shock. He had to explain that his brother was up to no good, and that Shatter might be in danger. 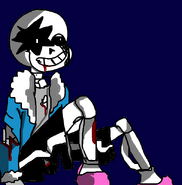 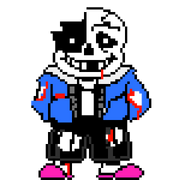