Scattered across space and time

Hypocrisy
Guns
Being near the CORE

N/A
Frisk Marusina[1], better known as CORE!Frisk, is an AU Frisk created by DokuDoki. They are an Multiversal Omnipresent child from a pacifist timeline in which they've been tossed into the CORE for preforming too many RESETS. The event, in combination with a reset attempt and powerful determination, has caused them to become an Out!Code able to observe and interact with the entire Undertale Multiverse. They're well known for rescuing genocide survivors and bring them to a secretive dimension known as the Omega Timeline.

They were born in a rare alternate future of Slovakia in which the country has entered a civil war. Their father died on the battlefield when they were very young, which forced their mother to raise the child alone. When Frisk was eight years old their mother died of infection and the orphan found themself with no family left and nowhere to go; and so they decided leave the country and go to a place that their mum promised they’ll visit together once the war is over. After long weeks of constant traveling, the child arrived to Mt. Ebott somewhere in the United Kingdom and decided to rest in a cave; their foot slipped, and they fell into the Underground.

Time at the Underground

Frisk's adventure in the Underground is largely identical with the events in the game, specifically the Pacifist Run. Mesmerized with the adventure, they began to continuously Reset the happy ending just to re-experience everything all over again, not realizing their actions are wrong and harmful to the others - specifically Sans, who was aware of the loop they were all trapped in. This took a great toll on his mental health. One day as he witnessed Frisk on the cliff of the broken barrier about to Reset the world, he broke down, teleported them both to the CORE, and he threw Frisk inside in hopes that erasing the human from the existence will free him from the circle.

As the terrified Frisk attempted to save themselves through Reset, their Soul was directly exposed to the CORE's magical radiation. This, combined with the fact the Reset and the Soul scattering aligned perfectly, the event has caused them to uncontrollably scattered across the Multiverse like the Royal Scientist before them. Witnessing all good and all evil in the world, something that should've broken their mind beyond repair, instead awoke an unprecendent epiphany and the child became Determined to change the multiverse for the better.

Much like the Royal Scientist, Frisk has also had their existence erased from the native universe altogether.

With their soul scattered across the multiverse, they lost access to the Save/Load/Reset (SLR) function needed to undo the tragedy that fell upon them. However not only did they gain the ability to observe every single AUs and Timelines within the Multiverse at once, they can also manifest a physical form in them as well.

At one point, they stumble upon an empty dimension that can be accessed from anywhere in the Multiverse at any time even without special powers. They promptly claimed ownership on the dimension itself, and established a sanctuary for refugees of the destroyed timelines and AUs. This lead to the foundation of the Omega Timeline.

Their physical form usually comes with well trimmed bob cut hair with pale grey skin and a pair of Void-like eye sockets that they could never fully close. They wear a long sleeve puffy sweater, with a pair of horizontal stripes, and a pair of sweat shorts, complete with white socks and semi-formal shoes. Their Coloring were quite similar to that of Deltarune's Vessel, with the exception of the dark grey as oppose to brown.

It should be noted that their true body was destroyed upon scattering across the multiverse; but how they manage to manifest a physical form is unknown.

CORE!Frisk is a fickle, enigmatic child who is unable to mentally grow despite their nigh infinite knowledge and wisdom. They frequently combine the behavior of an immature child and a wise adult, using eloquent words and bratty remarks within the context of a single conversation. While they are fully capable of mature behavior and most people's first impression of them is likely a reserved one, most are usually quick to witness Core's childish side. It seems that while Frisk wants everyone to take them seriously, they also don't want people to avoid them out of fear - therefore, they go out of their way to appear as non-threatening as possible. Despite this, Frisk claims that they never put on a deceptive act and simply behave however they feel like behaving.

Even though they're incredibly compassionate and supportive, somewhere deep down they believe no one understands things better than they do and may subtly treat everyone as such. This behavior tends to amplify the more they dislike someone, growing all the way into mocking condescendence - although most people are never going to witness this side of them. Above everything else, Frisk rejects the notion of sacrificing people's lives and well-being for things such as "greater good" or "creative vision" and doesn't take lightly for their ideals to be challenged; therefore, the people Core Frisk despises are those who willfully hurt others for the sake of curiosity, advancement, or power. It is worth noting that if those people are simply misguided or despairing, Frisk WILL pour painstaking, unfathomable effort to help them better themselves and guide their path towards redemption. Ultimately, Frisk has a simple goal, and that goal is to help others.

It appears Frisk is afraid of sirens and firearms due to trauma caused by the war that plagued their childhood. They also dislike going underwater because their sockets drain the water and pouring it all back out is really uncomfortable.

Though they no longer have access to the SLR function post scattering, they gain a new slew of powers. Those include:

He's responsible for their scattering across space and time. Since that also retroactively erased their existence in the native Universe, he has no recollection of what happened before it, nor is aware of their existence.

Since Frisk never attempted the Genocide Route (let alone complete it), they never met their Chara in person. Their Soul was bound to Frisk's Soul since they first entered the Underground, and while they were unable to interact they accompanied them long enough that Chara has formed a one-sided friendship. The two finally met for a split second when Frisk was thrown in the CORE, but Chara was completely erased shortly after.

Like Frisk and Gaster, they're forever forgotten by everyone in their native AU.

Though Error claims that they're an Anomaly and needs to be destroyed along with the Omega Timeline, the two are actually on much friendlier terms than most would expect, including Error himself. Of course, that doesn't mean Core doesn't stand in his way whenever he attempts to destroy the AUs by messing with and ruining his attempts to do so, and therefore it is best to describe them as enemies. Despite his hostile behavior towards them, Frisk often approaches Error on peaceful terms whenever he's not currently threatening a timeline, supposedly with the goal of getting him accustomed to his presence.

On the surface, Core and Ink share the same goal of protecting the AUs. However, it would seem that Core is more interested in helping the people inside the AUs while Ink wishes to protect the AU itself regardless of what happens to its inhabitants. He likely doesn't approve of their interference with "the original script" and willingness to evacuate people from dangerous timelines. Likewise, Core Frisk disapproves that Ink prioritizes the creator's vision above all else, including the well-being of humans and monsters.

Other than their clashing ideologies, the two appear to be on fairly friendly terms. It was suggested by one of the creators that Core's "lack of colors" might make Ink uncomfortable.

Became friend with the antagonist of ReaperTale through mutual intrigue. Frisk kept Chara distracted from their initial goal of mass destruction through, among many other things, the power of video games.

He's the first to be brought into the Omega Timeline after he became the last of the Monsters after the war brought his kind to extinction. He have good ties with CORE as they are the one who gave hope to others that whould otherwise have no future.

Poppy is a living doodle rescued by CORE!Frisk shortly after she was created and abandoned by her creator, and thus became their adopted daughter. Due to their appearance (namely, their grey hair), she refers to them as her "Granpa" (which stands for grandparent, not grandfather).[3] 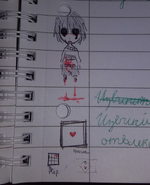 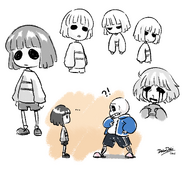 The first image of CORE!Frisk ever posted, Created by DokuDoki 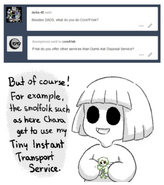 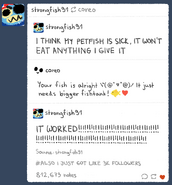 A "screenshot" of Core's in-universe blog reply, Created by DokuDoki