Undertale OC Wiki
Register
Don't have an account?
Sign In
Advertisement
in: Articles in need of cleanup, OCs, Protectors,
and 3 more

Canvy, Can-Can(NEVER CALL HER THAT)

Well, If she makes herself hair, it'd be black

Depends on her mood.

Often I am upset

That I cannot fall in love

But I guess
That removes the stress of falling out of it..

Canvas is the Non-canon sibling of Ink, from ArtTale. ASK BEFORE USE or I will feed you to the memes.

Feel free to make her sprite for I'm not good at sprite making. Any art is appreciated! Every quiz that has been taken with her in mention has said she is not a mary sue, just to clarify. SO yeah, at least she doesn't have hair like the normal Skele-sue oc's

tired of me yet?

Canvas's original purpose when she was created by Ink was to watch the AUs for him while fighting Error. At first, she was merely a puddle of weird paint-like slime, with a skull..Kinda, her form was very unstable so she constantly stayed in the sphere, often trailing a puddle of ink behind her. And sometimes, when she gets scared, still, her form melts into an ink puddle with her scarf and hood.

Over time, she actually gained the strength to make her own form, so at first she literally had no feet, her back sweatpants just covered her feet, and were all goopy. Soon her magic managed to change her psychical form to what it is now. No, she can't make herself taller. BTW, she actually wasn't even supposed to be sentient.

Ink now could actually tell her things and try and get her to do them...Emphasis on TRY. It was tough, due to the fact she had a mind of her own now. And Ink being technically her creator, she considered him as a sibling for some reason, and of course..Loved to annoy the hell out of him.

So her original purpose was scrapped and she was allowed to freely roam the CreatoSphere (OR whatever..)

She currently travels everywhere now, but she will always live in the Creation sphere for that is where she was created. Sometimes, she'll pop in an AU to check up on it, and if there is anything missing.

How she got the scarf is quite funny. She was wandering the CreatoSphere and ended up falling in a puddle of multiple colors of paint. Her left arm was drenched in indigo-blue paint, and some splashed onto her right arm. And so she went to go..'filter' herself out, though she like the indigo color, so she had to try and figure out a way to have it as clothing. She ended up wrapping her arms around her neck and sat there for a good few minutes before her scarf actually formed, the white ends are there due to her hands being white..of course

Strangely he feels at home in this--

Strangely He feels at home in this

She has markings on her forehead and shoulder-blades that are of swirls with strange dots in random places, but they look faded.

Canvas wears a grey hoodie to hide the swirls on her head, because they make her feel ashamed.

She also has a indigo scarf with white ends that could turn into claws in combat, Her scarf has at least two ends so her scarf always has two halves flowing and not just one.

She also wears black sweatpants since they are comfortable and don't scratch at her bones like jeans do. She also wears white slippers. If Canvas were to put on shorts, they would also be black.

She will never wear revealing clothing.

Also, she's shorter than Ink, since he was tired of being called shorty

I'm a little sick right now, But I swear

When I am ready, I will fly us out of here..

Imagine Canvas super sarcastic. Her sarcasm is almost always prominent and it is her one of her main personality traits that those who know her either DESPISE her sarcastic remarks, or they think her remarks are Funny. Some new monsters that she meets may think she comes off as Rude, or arrogant due to her Sarcasm. However, she has no intention of coming across like that. She has the best intentions for her friends and does not wish harm on anyone. Also, shall I mention she cannot hold a grudge against anyone.

Her memory is like an elephant, and this of course makes her easily unconvinced when a Rude monster tries to make a facade of being nice. She will lash out at them, pointing out about what they have done. Her bringing up past memories almost makes her seem rude, or even narcissistic. Canvas does not wish to be seen like this, as established. She will constantly remind the being of what they previously said, though.

When around friends, she is a giddy, over-dramatic, female. She loves to randomly hug them and tickle them, don't take this as her being annoying. She likes to have fun with her friends and will sometimes proudly do a thing or action persistently, even when asked to stop. She thinks it is funny, and will try to get others to join in, she will always accept a friend for who they are, no matter what. She is very Open-Minded.

When upset, she will dwell on it for a while, often thinking that if she stays quiet, the person who hurt her will forget what happened or apologize. Though her mood will turn back to normal in a few minutes, maybe even a few hours if the situation is bad or Horrible, when in her depressed state. For example: if they ask her if she wants some of the food a monster gives her, she will say things like "Are you sure?" It's best to leave her alone for a while when she is in this state. She often times wishes when in this state, such as being able to erase the memory of the situation. She will practically act like whatever the monster wants her to be in this state..Well, not completely

The reason her theme song is Cut my Hair is because mainly she knows she can't be as good as Ink, no matter how hard she tries, she'll always be his shadow. The reason she's a bit scared of love is that she feels as if people would regard her as a fake, a mere clone of Ink. So half the time, those green eye lights she shows in her eye sockets, may as well be a facade. Canvas has Athazagoraphobia, meaning she's afraid to be forgotten. If anything, she'd rather be regarded as a villain, than ever be forgotten. In her mind, in her very soul, she'd be anything but forgotten

She can hide her emotions by making her eyes grey, she sees showing emotion in combat as a weakness ad is scared to show her fear through. Her emotional colors consists of:

Canvas can also slightly levitate, only a few feet off the ground in AUs as she respects the way that the AUs work, however in the Anti-void she can fly as high as she wants.

Her size can also allow her to escape fighting, as she sees it as it is useless and a waste of time. Canvas can also blend into things such as snow or grass, but not completely as her outline is seen.

Her scarf's ends can also turn into giant claws for gripping onto things or scratching enemies, but mostly for climbing.

The only other thing that she can do is summon 4 gaster-blasters that she can change the size of. But, they are actually tied to her soul, if one breaks, her soul will become damaged.

Despite her abilities, her body is made mostly out of paint, and rarely when experiencing an extreme emotion, her body will..Say, collapse on itself, pats of her will melt, usually her hands. She is actually quite afraid of this and often tries to keep calm in different situations, such as trying to defend an AU which she does....occasionally. Sometimes, when the situation is too scary for her, Canvas' body will completely collapse, leaving a small puddle of grey ink along with a purple scarf just melted in, only her head would actually be seen, and even then, she'd be mute. She can do this at will sometimes to freak out people.

Since Canvas' body is made out of ink, technically she can make herself hair, but it does not become a bright color, it becomes a dull black, with rarely a pulse of color. It will either form itself as an undercut style, or a weird bubbly curly mess.

Canvas' body is made out of ink, so she can change it to anything, mainly her arms, as she finds it fun to turn her arms into whips. However, due to her body's ability to change, she can technically change her gender as well, albeit she identifies as female.

"He's cool, and very shy. I wonder what makes him tick. But why so flattered so easily? It's a simple Compliment, butttt...I won't judge."

"Brother! HE's the coolest, though..I wish he wouldn't get so fussy over the AUs, some are kinda unneeded! Like UnderLust!"

"Pleasetell me why they don't have a picture yet if they're so awesome?"

"I kinda..Like her. She's cool, also scarf buddies. But I wonder what the au's name was..?"

That I can't fall in love

(Some pics already from wattpad, where she was originally came up with) 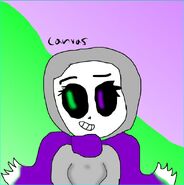 The original art by me.

Made by LaurenKeck7 on Wattpad

Another Pic made by TheSandwingDragonet on wattpad 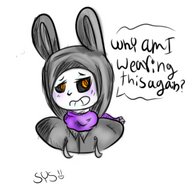 That removes the stress of falling out of it..