Bringer of Chaos, All knowing Fool,

Varies (usually white)
Chaos!Jevil is an Out!Code version of Jevil created by DocMelonhead. He’s a glitched Darkner from a destroyed Deltarune AU with the awareness of the fictitiousness of the Multiverse.  This gave him the excuse to cause havoc and mischief every where he goes.

Jevil came from a Deltarune AU quite identical to the original. However Error!Sans came to this AU to destroy it, and the Darkner got caught into his strings. However, his chaotic nature conflicts with the strings programming and cause him to glitch’d into the doodle sphere by mere chance. When Ink came to notice the glitching Imp, he decided to use his inks to imprison the Jester out of fear of his powers. However, not only does the Darkner absorbed the ink, he also gained the forbidden knowledge of the Creators and the AUs that they created from it.

After escaping the Doodlesphere, he now use his newly found chaotic powers to roam the Multiverse and an create mischief where ever he goes to relieves his boredom; much to the dismay of their inhabitants.

He’s a fun loving yet wise jester whose despise staleness and order, and does everything to spice things up a notch. He also mess with people emotions out of boredom just to get a reaction form them. He also despise imprisonment of any kind.

Despite virtually omnipotent, he’s limited to the laws and rules of each given dimensions and AUs (for example, have to enter the Omega timeline through a door of his choosing).  Plus he tends to get tired from all of the chaos and mischief that he cause, and therefore have to retreat to a secretive dimension to recharge. 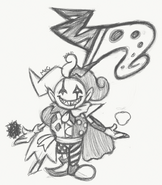 first draft of the character Created by DocMelonhead
Community content is available under CC-BY-SA unless otherwise noted.
Advertisement