View source
watch 01:36
We're Getting Mutants in the MCU - The Loop
Do you like this video?
Play Sound

``You are not in anyone's side, you side with yourself, no one can help you.``

Even before ChromaTale was destroyed, Chroma had already been travelling from au to au and goes back to his au at the end of the day, and that aside, Chroma's Au has no problems at all, no genocide, no murder, but Chroma himself is the problem. Chroma has the habit of using blood to paint which is causing Chroma to hurt his brother just for the sake of blood, the human hated to see Papyrus get hurt by his own brother, therefore the human named Zen is forced to do multiple resets, Not Until Error came and destroyed ChromaTale.

Chroma sans left eye is colored white only and is shaped like a diamond, his eyes do not change color nor shape, he also wears a Valentines red colored scarf, he wears 2 layers of clothes, first a sweatshirt, and second an oversized T-Shirt, he then wears an apron from his brothers daycare named "Papy's Daycare". He doesn't wear any shoes and only socks despite living in a snowy area, He also wears a big long scarf around his neck

Chroma!San is only nice and cruel to certain people or groups, when he acts kind and friendly when he is around the people and monster in his Au, he acts cruel, he acts all friendly when him and his brother are around other being, but when they are both alone, Chroma would forcibly take blood out of his own brother, he also acts cold and cruel towards Maltreat despite being bestfriends, He gets along very well with Epic!Sans.

Chroma!Sans does not and will not hesitate to harm or threaten anyone, even a close friend or a family member, he'll do anything to achieve his goal, even if he will be killed in the process he won't give up very easily.

Chroma can originally perform 3 majestic feats just with a small simple brush and with any paint or blood, Chroma can also perform other splendid feats thanks to Maltreat!Sans's soul fused with his:

What Chroma can do by himself:

Abilities he got from fusing souls with Maltreat!Sans

Chroma calls him Papy. despite being Chroma's brother, Chroma Harms and threatens Papyrus when no one's around.

Chroma!Sans met Fell!Ink while traveling into other Universes, the reason Chroma Tries to kill Fell Ink is for defending defending error from him, but there are times where they both hangout together. see more about Fell!Ink Here 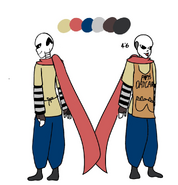 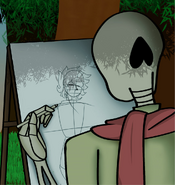