Crisk is a Frisk Out!Code created by Reaper Bruh Sans. She was rescued by Goseyya to be used as part of an experiment involving the OmniStone. After using it to take out the Chara of Her AU, she bacame unstable due to its effects. Now, with the created Omnibook as a stablizer and the source of her new powers, she wanders throughout the Multiverse, protecting the AUs from Genociders and Destroyers.

Crisk was originally a Frisk from a Genocide Timeline, where the Genocider was Chara. As Chara about to finish her off, she RESET the Timeline, only for the killer to remain unaffected. It was when she was whisked away by Goseyya, who took interest in her determination and gifted her with the OmniStone as part of an experiment. When returned to her AU, Crisk used the stone to easily defeat the Genocider, yet she’s too late to save her world. To make matters worse, the stone has left her in an unstable state, as she’s on the verge of scattering within the consciences of multiple Frisks. Taking pity on her experiment, Goseyya took Crisk back in and created the OmniBook as a stabilizer to her entire being.

With the Book at hand, Crisk now travel across the multiverse to protect other AUs from Out!Code threats and Genociders.

Like Classic!Frisk, Crisk wears a sky blue shirt with a pair of horizontal magenta stripes. Over it, she dons a green hoodie coat, with its pair of yellow horizontal stripe. Crisk also wears grey pants with a pair of brown boots.

Crisk is easygoing and loves puns. She's also very determined to complete the task at hand, no matter what the circumstances.

Due to the effects of the OmniStone, she inadvertently inherent some of the personalities of the other Frisks in the Multiverse. Sometimes she's merciful (just like Pacifist!Frisk), genocidal (like Underswap!Frisk), or just plain unpredictable (like CORE!Frisk).

Crisk loves to talk with her. She still sees Toriel as a mother.

Crisk thinks Chara is not bad because of her past.

She usually tries to talk with Gaster.

The one who save her life, twice.

The Omnibook, as depicted by ReaperBruhSans 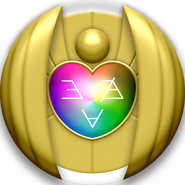 Retrieved from "https://undertaleoc.fandom.com/wiki/Crisk?oldid=11134"
Community content is available under CC-BY-SA unless otherwise noted.