Crypto is an Out!Code created by FurryLord. She’s a mysterious young female skeleton who originated from the Anti-Void. She’s now traveling the multiverse as a Code Editor.

Crypto was first spotted in the antivoid by an Error, more or less as a white glitch kind of in the shape of a Sans. He attempted to erase it by impaling it with his strings, but the thing dodged. He could hear scrambled words coming from it. After a few more tries, Error gave up, and was about to leave, before the thing took physical form. Crypto took one look at Error, was terrified, and fled. She eventually found herself in a completely uninhabited part of the Anti-void, and decided that she would live there. However, she wasn’t there for long, as it eventually became so glitchy that she would spaz out randomly, so she left. She was still looking for something to do, however. She eventually became a Code Editor, fixing and improving other AUs. She modified her glitch first, to make sure she never accidentally erased anything with her presence, like her original home.

Crypto is a bit taller than an average Sans, despite her slight slouch. One of her eyes has the appearance of being filled with a blue screen, while the other socket is black with a red eyelight. While speaking as ILU, her eyelight is purple. She wears a long-sleeved black hoodie with white lines down the sleeves, the hood in which she usually keeps up, and black jeans. Her shoes of choice are black high-top trainers. There is a pair of handcuffs around her right wrist. Crypto tends to be surrounded with white glitches.

Crypto is known for being quite random. She will often say wierd or unnecessary things that pop into her head, without ever thinking about the effect it may leave. Crypto hates this about herself, so she tries to stay quiet at all times, essentially being an introvert. She can be quite provoking in a dangerous or stressful situation. Despite all this, Crypto is very driven by her goals and longing for friends.

Crypto has developed an alternate personality that she considers a true part of her, called ILU (ee-Lu). She is quite manipulative and calculating, and lusts for attention, weather positive or negative. ILU is also very sarcastic, and never takes anything seriously. Despite that, ILU does not enjoy hurting people. ILU and Crypto get along very well. 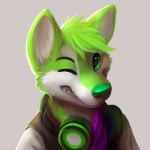