Undertale OC Wiki
Register
Don't have an account?
Sign In
Advertisement
in: Articles that need to be improved, OCs, Wanderers,
and 3 more

Dark Killer Sans, known in short as DK is a silent and mysterious character from Dark Void with unclear origin. After escaping from his home, he becomes a wanderer-turned semi-killer on his reason to collect more souls from the victims. Initially, Dark Killer wants to seek more about the purpose of his existence.

Nothing much is known about Dark Killer's past. He was unknowingly created, along with four unknown people in the void filled around with complete darkness before he manages to escape from the place. Dark Killer has no such memories about the Dark Void or the purpose he was created to exist.

Dark Killer has average strength based on ATK, DEF, and the main weapons he uses. But, both his HP and LV are undetermined and exact unknown.

Dark Killer wears his clothes are almost all-colored black, especially his shoes. He has a creepy face with a smile and no eye pupils. However, he is permanently incapable to blink both of his eye sockets, making any facial expressions, and moving his mouth. Both his hands have a rhombus-shaped hole.

Dark Killer is a serious, fearless, and cold person, but does not appear to be insane and too merciless. Since he is speechless in his life, the only two solutions are to write with his notes and show them what he’s trying to say, or make visible bubble expressions. Despite his killer personality, Dark Killer is not a true killer but rather a neutral to seek a balance between good and evil for himself. He never plans any ill intentions to bring suffering to innocent people.

Dark Killer is always doing idle-standing himself without moving like a statue during his break, sometimes while sleeping, or doing a purpose to attract his victim's attention (mostly who committed sins) before in the right moment to begin the kill smoothly and silently. While killing people was a part of his job, collecting their souls is one of his hobbies. If he collected a soul from the dying victim but found it damaged or something might not interest him, he will throw it back to their vessel, resurrecting them instead before proceeding to walk away, leaving them in trauma shortly.

Dark Killer is also a good listener as he is also good at doing his job. He may ignore any people who annoy him and not hesitate to send them away if they continued. He also can get bored of hearing anyone’s speech that is too long.

Being a Dark Void creature, Dark Killer is the strongest and possesses a power of lethal darkness that can bring an intense fear among people. 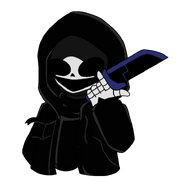 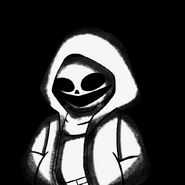 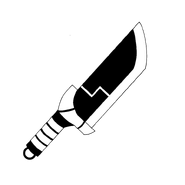