Normally red, but glows different colors depending on his emotions.
Draco Dings, the 3rd son of W.D. Gaster, and brother to Sans and Papyrus, as well as their many variations. He has a sister, named Trisha Dings, but, until she introd[glitch in file]. He has 3 abilities, or powers for short. These 3 are Teleportation, Portal-making(AKA, universal/dimensional travel), and much like Error, String manipulation. He got this third power directly from The Universe Destroyer himself. He stole it in other words. Using the smarts he derived from Gaster, he cut off a piece of Error's stings, and mixed it into a Power Reduction serum. The next day, he woke up to having Error's Strings. They were a Crimson Red, like his soul. He has two friends above ground. Andrew Bell, and Rile Jones. Andrew stayed above ground, while Draco and Rile ventured into the Underground. Frisk has apparently already been in the Underground, and was there when they fell in. Long story Short, Draco assists in breaking the barrier, and everyone now lives above ground. Draco continues to travel through universes, helping out wherever he can.

Draco's past is still undefined, as he keeps it to himself, and has ever really told Sans and Rile. However, we have found something worth viewing. Take a look.

When Draco was 7, his mother, [Name not found...Fixing...........Name Found...Adding..........Done]Elizabeth, was killed by a mugger. Back then, he was quite different. He had a love for blue, and wore shorts, and T-shirts, no baseball caps, no jackets. After his mother was killed, he started wearing pants, and hats. After his father, Gaster, died when Draco was 9, Draco started wearing what he does now. After Draco got his strings, he was kidnapped, and brought to a lab. The group that operated this lab called themselves, the MRS, or Magic Restriction Service. It was made before monsters came aboveground, but it was made properly. They performed tests on him, and tried to extract his powers. One day, he broke out of the watery tube that contained him for a little while. He killed guards and scientists on his way out, then destroyed the whole building once he got out. He killed the SWAT team that was outside, and headed home, changing his clothes on the way there. When he went back to school, he had missed a year, but the teachers weren't about to complain. On his first day of school that year, he saw his friends, Rile and Andrew, being bullied. Draco went into 'pissed' mode, and killed the bullies. For the next couple days, Rile and Andrew stayed away from him, as did everyone else. After those couple of days, Rile wanted to hear about it, so Draco told her. She didn't tell Andrew, but told him that it was okay, Draco was just protecting them. Andrew decided Rile was right, even though Draco killed a bunch of bullies. Needless to say, nobody hurt Rile or Andrew anymore. Draco wasn't suspended, or expelled, or even locked up. He still went to school, and nobody was about to stop him.

Draco wears a red T-shirt, and a black hoodie, with a red stripe down each arm. He also wears a pair of black jeans, with a red stripe down each leg, and red shoes. He wears a black baseball cap over his black, spikey hair. He also wears a pair of gloves, which hide the fact that his clothing is made of strings. He also has an ability that allows him to have multiple personalities, all of them based on another AU. He calls this, Multi-Universal Personality Disorder, or MUPD for short. His eyes are also very strange, as they glow different colors based on his emotions. His eye colors are this:

This list applies for all variations. Any songs that are for that specific variation, will be put on that variations page.

Draco has been to a lot of AUs in his travels. He stays in Undertale for a month, and then travels through AUs for a month. Here are some of the AUs he's been to most recently: 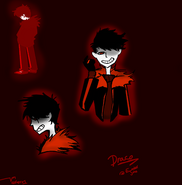 Any pixal arts featured on this page were made by me as well. The art by EclypticAstrid15 and Nvis10nClassics is not entirely accurate, but it's the first time someone else has drawn him, so I featured it anyways. It's very well done.

To anyone who wishes to use this OC, ask first. I don't appreciate anyone using my OCs without my consent, so please, ask me before you use this OC. If you don't like how I explain everything, or you don't want to add a certain piece of info, that's fine. Just ask me first, please. Also, this character and his relationships to other Undertale characters is only canon to me. No one else is required to accept this. The only problem is, is that I've already fleshed the story out this much, so changing it would mean changing everything about him. That's why I let other people believe what they like about the character.