Female
Drawing!Frisk is an Out!Code created by Kyynas. She is yet another simple Frisk, who had her world destroyed after a genocidal route and her Reset. Frisk was left alone in a white space without friends and family, and started to try to rebuild her AU. Despite being a newbie with this Alternative Universe thing, she tries to help other existing AUs as much as she can, regardless of whether she is on a Genocidal route or not.

Frisk was raised by her mother and father. Her mother was unemployed, while her father was a police officer. Her parents despised each other, and it is implied that they argued at least every night. However, the couple did not try to spare Frisk in their fights, verbally and physically abusing her.

Her father spent most of the family’s money on alcohol as a result, leaving the house in very bad shape with empty bottles of alcohol everywhere, and bills left unpaid. As such, Frisk spent most of her time away from home, wandering most of the time in the park to avoid her drunk father.

One day, her parents were fighting and she heard a scream, making her way to the living room to see what happened. There, she saw her father repeatedly beating her mother to death, and after he realizes that Frisk was watching, he starts to go after her too. Frisk runs to the kitchen, taking a knife that her mother hid to defend herself in case her father tries to kill her someday, and flees to the upstairs bedroom. When her father came after her, she stabbed him in self-defense.

With nowhere to go, she ended up finding Mt.Ebott where she intended to kill herself. But there she ended up seeing the happy world in which she had so much fun. Her adventure in that place was incredible, she had met people so wonderful and great that she wanted to live it forever, again and again. This child never considered that what she was doing was selfish and that it could hurt someone. Her world was destroyed due to her Reset, and Frisk was left alone in a white space without friends and family, trying to rebuild her AU. After a while Ink went to that AU to find out what was there, but the only sounds that Ink could hear was the sound of Frisk’s cry of despair. Ink helped Frisk to be happy and was a great help to her in general.

Later, she meets Core Frisk, who tries to get her to a safe place, but she denies it, saying that her world was still there, despite Ink saying otherwise. Periodically Ink would visit her so she wouldn’t feel lonely (he gave her Iris, who is a little bit of paint, to stay with her when he’s not around). On these visits Frisk developed a long-standing admiration for Ink. Despite her shyness, especially when she is unable to articulate what she means, Ink and Frisk get along. One day when they were drawing things Frisk got up. She looked a little depressed when Ink told Frisk that he couldn’t raise the dead, however, Error entered her universe to take her soul. Ink tried to intervene but was shot down by Error when he tried to save Frisk. Frisk out of desperation tries to help her friend, but gets trapped by Error’s strings, and he ends up tearing her arm off. Ink caught the attention of Error causing a distraction for Frisk to escape.

Frisk ran away, leaving Ink alone. She was very scared and very worried about Ink, making her feel useless, causing her to have a mix of various feelings. She immediately gets mad at the issue, and that attracts Nightmare Sans. Both make a deal: if Frisk can mentally hurt someone in every universe she visits, she can take parts of those worlds to rebuild her own. Nightmare noticed that she did not have an arm, so he removed a piece of his black goo to make a new "arm”, moved by sadness, hate, and selfish desire she accepted.

Frisk committed several genocides which she regrets. She knows that these genocides destroyed several AUs in which the possible survivors are going through the same sadness that she went through at the beginning, and this disturbs her to the point of madness. Before she goes crazy she meets Fresh Frisk in some AU, and she is uncomfortable with her presence because the only “ communication ” she had tried to kill her, the same thing with Fresh Frisk and it didn’t take long until she realized that Drawing! was just a scared and crying little girl.

It didn’t take long for both of them to become friends. Fresh told her about her adventures and Frisk was amazed by her stories and it didn’t take long for Fresh to notice that her arm was bandaged. She asked Drawing! about it out of curiosity - they were friends, right? When she told her Fresh laughed asking if that was a joke - who was dumb enough to make a deal with Nightmare? As she said that Drawing!Frisk’s face was serious and she fell silent. Fresh asked her if she wants to run away and Drawing! said no, saying that Nightmare would find her, but even so, Fresh took her to an AU. It was a peaceful pacifist place, with a small town in which they could have a new start.

They both live in a medium apartment which belongs to Fresh!Frisk. Now Drawing! had a house and a new friend and a new life, but that didn’t change the facts anytime Nightmare can come after her because of the deal. Nightmare knew that one day this child would try to get out of the deal, but he wasn’t stupid. He can track the girl eventually through the negative emotions flowing through the arm he gave her.

Drawing! has a very diverse and colorful appearance, which reflects her personality. She has heterochromia, accompanied by a huge cream brown scarf with yellow stars and roses. Her denim monkey is covered by her purse (carrying her notebook where she makes her drawings and poems) in the same color, only in a dark tone. She also wears a baby pink jacket tied at the waist. On her feet are her brown boots.

Drawing! is always cheerful and outgoing girl, always kind, shy, sweet, delicate, soft-spoken, and polite. She is a kind person, who is not willing to see people suffer in front of her and does not like to fight much. She is usually understanding, even forgiving towards certain individuals who clearly do not deserve any forgiveness. Drawing! is able to understand the pain of others, she usually thinks carefully before acting, allowing her to think more clearly in difficult situations. She also became very selfish, ruining the pacifist routes of other AUs just to restore her AU.

Because of Nightmare’s “missions” of committing genocide, her LOVE level may be close to Dust Sans’s level or even higher.

After Drawing was almost killed by Error and made a deal with Nightmare, she meets Fresh Frisk. Their relationship was strange as Fresh Frisk did not like her company very much at first, but after a while they both became friends.

Fun fact: Fresh Frisk was the one who gave her the name ‘Drawing’ to Frisk since she likes to give nicknames, she said that she was very similar to the rainbow vomit project (Ink).

Ink was the only one who kept her company at the beginning of everything. Ink would visit her sometimes so that she wouldn’t feel alone (he gave Iris, who is a little bit of paint to stay with her when he’s not around), and during these visits Frisk developed a long-standing admiration for Ink. Due to her shyness, especially when she is unable to articulate what she means, Ink and Frisk get along. Drawing! still feels ashamed for abandoning Ink when she was fighting Error and is afraid he is angry with her, so she hasn’t looked for him yet.

Error is a destroyer of alternative universes, and he destroys anything that he considers to be a mistake, yet it was him who tore off Frisk’s arm and tried to kill her for considering her as a failure. But it doesn’t take away from the fact that she tries to be friendly with him, she knows about his relationship with Ink through Fresh Frisk (the only one that goes to AUs, Drawing! Is still afraid to leave) and this reinforces her theory that people a second chance.

Even after a few years Drawing! is still afraid of Nightmare. She fears that one day he may come after her, and this is a great reason for her not to leave the AU where she and Fresh Frisk live. She knows that he “cursed” her arm, and it only gets worse from negative thinking, so she avoids thinking about heavy subjects, otherwise black goo will consume her body.

Core! was the second person who tried to help Frisk. She tries to take her to a safe place, but Drawing! denies it, saying that her world was still there. Core is one of the few who knows it exists.

After Drawing! decided to overcome her fears, she decides to go back to the AUs together with Fresh!Frisk. They found Cross in an empty white place sitting on the floor. He seemed sad, and despite the fear that he could kill her, Drawing! went to try to have a friendly conversation with him. He did try to kill her, but after a few conversations she realized that the both of them had the same story and the same profound sadness for not having their home. Cross doesn’t like her company, but sometimes he likes to talk to her. 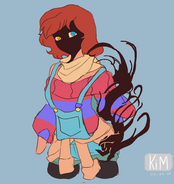