"This is a mirage [...] an ilusion created by someone..." -Eight- Eight Sans is an OC created by ArtCatDraw.

Numbertale Sans, better known as Eight. It comes from Numbertale, an Au who mysteriously disappeared.

He was the only survivor, he lost part of his memory at the time of the cataclysm of his universe. His memories are blurry, the only thing he knows about him and his AU is thanks to a diary that he always carries with him. He is an anonymous vigilante who protects the AU from the shadows.

He is someone quite neutral.

After being in the vacuum of his AU, he was found by Core Frisk, this led him to the Omega line, he was for a while learning to handle his new magic, one day he decided to leave it to undertake a journey to better know the multiverse.

On one of his trips he meets Horror Sans, who wants to kill him, to his bad luck he turned into a human so Horror wanted to devour him. While trying to defend himself, he discovers that he can spawn two types of weapons, which he named Aoi Shio and Nigai Orenji. Inadvertently, he opened a portal that led him to Underswap, managing to escape Horror.

He was a prisoner of Swap Sans for a few minutes until he returned to normal to the surprise of Swap Papyrus and Swap Sans, who did not finish asking him questions. After taking him to Undyne for some studies, Swap Sans introduces him to another Sans named Jackson. At first he did not like it because he made several bad jokes and found it annoying.

In an unexpected moment, screams were heard from Grillby's, everyone was on their way until they manage to see that the cause of such a disaster is another sans but very different, it was Killer Sans, Papyrus and Jackson began to fight Killer, Swap Sans helped evacuate into the area along with other monsters.

Eight froze, remembering the cataclysm again, his thoughts interrupted by Papyrus and Jackson. Killer had Swap Sans who was about to kill him. Papyrus managed to save him but suffered a stab in the shoulder.

Jackson made Killer go back and gave him a fight, Eight when seeing such an act made his yellow weapon (Nigai) appear and attacked Killer, gave him some battle, Jackson and Eight joined forces and managed to expel Killer through a portal .

Eight ended up passing out. After a few minutes he woke up at Undyne's house, where Swap Sans, Papyrus, and Jackson were. Jackson told him that Undyne did some studies where she discovered that she has 2 human souls in addition to having only half of her monster soul, she believes that this is the reason why she transforms into a human.

Jackson tells him about the existence of Sans in the multiverse who are equal to Killer, who come to a UA either to eliminate it, destroy it or simply make its inhabitants suffer.

Due to this experience, in addition to knowing the existence of these Sans, Eight makes the decision to become an anonymous protective vigilante of the Au's.

He wear a short-sleeved turtleneck shirt in heather purple, over it is a black jacket with three eight prints. Found on your back and front of your jacket.Black and white fingerless gloves, with an eight printed on each side. As well as protective sleeves.

Hanging behind the jacket is a dark blue scarf straps with a light gradient at the ends and a short white line. Just as it has a light purple necklace hanging with an infinity sign in the center.

The center of his left eye is shaped like a light blue triangle. On this one he has a red scar and on his left cheek he has a large peach colored rectangular band that covers an infinity-shaped crack.

At first he was a jovial, sociable, relaxed and not very serious sans, after witnessing the cataclysm that ended up destroying his universe and losing a part of his memory.

He became calm, serious and more reserved, in addition to taking things very seriously, he shows to be constantly alert.

They have a great distrust of those around them, especially of any Chara from the multiverse.

He does not feel a feeling of greatness for his achievements to save others, only the satisfaction of doing the right thing, he goes out of his way not to be so visible to the rest of Sans and other people in the multiverse. He prefers to do what he considers to be a shadow job and anonymously.

Ah, unlike the original Sans, he hates jokes. Kepchu sauce doesn't like it. Apart from being someone quite active and competent. He likes board games, especially dominoes. It is more accessible with children and the elderly. He likes cats, dogs, and sushi.

To fight and defend himself, he most frequently uses his weapons which are the Aoi Shio (青い潮) and Nigai Orenji (苦いオレンジ), better known as the Shio sword and the Nigai spear.

He rarely uses his blue magic and bone summoning. The only thing he cannot use frequently in battle is his Gaster Blaster

When wearing them for a long time, if you exceed the time limit, the wound on your left eye begins to expand. If that happens, he loses control like sanity and becomes a bloodthirsty killer.

Not being able to use 89% of his powers like other Sans this limits him and gives him a slight disadvantage. He specialized in hand-to-hand combat. He manages his two weapons to perfection, and creates his own traps.

One of the abilities he has is that he can transform into a human temporarily, although this is something that he cannot control of his own free will, since he does not know for sure when he will become a human.

The transformation has caused problems such as the occasion that Horror wanted to devour him. Having been kidnapped and another for scaring a town. The only way he can tell when he will turn human is when the unhealed wound in his left eye begins to ache.

Undyne of Underswap believes that this is due to Eight not possessing in its entirety his monster soul, the two human souls that are united to his soul cause the transformation. Although he does not know why they cause the pain in his eye.

He became a great friend to him, although they constantly started on the wrong foot, he annoyed him quite often with his jokes, someone Eight trusts. They have a sibling relationship even though they do not belong to the same universe.

Although Eight is not the biological son of Gaster from Jackson's universe, he sees him as a father figure, although he does not like being around him (since there are things that remind him of Gaster from his universe) he sees that he is a great person, Subtly show your appreciation with a simple gift. Although he denies it, he sees him as the father he could not have.

With Core he had little problems but he gets along well with Them. The OmegaTimeline is a temporary home for him.

Their relationship is unknown.

There is not much about their relationship, he knows about its existence but is quite ostile with him. 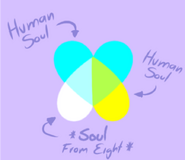