Exploit Sans is a being who came to exist due to an unknown entity, of which planted a seed in Null space, eventually growing to become Exploit. His main residence is unknown, but is most likely in Null Space as that was where he was initially created. In terms of motives, no one can see what goes on inside his mind, being quite a mystery to this day. Speaking of mysteries, it is quite unknown who the identity of this "entity" was that gave Exploit life, same goes with what ideas they had in mind.

In terms of aggression, Exploit seems rather calm, not easily agitated, which is quite ironic given his appearance. Speaking of his appearance, Exploit is easily misinterpreted as a villain, looking as if he is ready to cause chaos and destruction, which is quite the contrary. Disregarding everything however, his true personality is yet to be revealed.

Long ago, deep inside null space, an unknown entity arrived. Within that entity's hand was a set of data, implemented into a seed, which was planted into the code. After placing the seed, the unknown entity fled, sensing another presence nearby. Many years had passed from that point, and the seed grew enough to create a physical body of its own. However, the seed required data if it wanted to fully develop its physical form. Since there was no other code around, it had the idea to collect and preserve any leftover data located in the null space, and placed it inside a yellow gem that it had created to be a capsule. Upon placing the gem on his chest, his physical form was finally created, having additional features such as massive claws. Despite this, it did not have enough code to finish his body, leaving half his face to be constantly leaking or exposing his original form. With all that in mind, Exploit had no need to continue exploring null space as there was nothing left to explore, giving him the idea to travel.

Although it wanted to travel, It was unsure how it would be able to, given the fact it was essentially just born. However, within that set of code it gathered gave him the knowledge required to create a portal or rift. By focusing his magic, It was able to project a rift from his hand, a somewhat unstable portal as the outcome. Knowing the portal could collapse at any moment, he quickly headed straight into it, unknowing of where it led. Unfortunately, entering the rift caused major damage towards his mind, causing severe dementia, being unable to remember what happened prior. The results of said memory loss dropped him into a completely unknown location to his knowledge, leaving him with no other option but to start searching for answers.

Exploit is a skeleton, more commonly looked like a Sans. Unlike an average Sans, Exploit had odd markings on his face, quite similar to a Gaster. Furthermore, half his face is leaking or exposing his original form, showing that it did not have enough data to finish his body. Exploit also has one glowing yellow eye, being an odd shape. For clothing, it wears a gray jacket with purple lining, as well as a gray shirt underneath. Overtop of his sleeves are two Robotic claws, mainly used as his primary weapon, as well as being a replacement for his original arms which got torn off in battle. In addition, he has cybernetics close to his soul, as well as around his body, supporting his robotic arms, as well as sustaining himself. For pants, Exploit wears green shorts with a darker green lining. Exploits shoes are your average converse, with an addition of being magenta and purple, as well as a yellow spot on both sides of each shoe.

Not much can be said about Exploit as it does not think about much. However, it does enjoy travelling the universe, learning new things as it wasn’t given much knowledge before being planted. In terms of speaking, it doesn't necessarily talk. Instead, it uses radio frequencies to be able to convey messages to others, making it a little easier to communicate. However, it is still difficult to understand what he is saying, mainly due to half of his face being missing. In terms of emotion, Exploit seems rather calm, not overreacting or conveying any anger, as far as we know. However as mentioned above, his true personality is yet to be revealed.

This type of magic allows for rapid firing projectiles to be sent at whoever is being locked on, stacking up to tons of damage.

Unlike your average Gaster Blaster, Exploits Blaster has the ability to summon geysers that launch out of whichever surface it hits, devastating the battle with beams of light coming from the ground.

Using his sharp claws, Exploit can puncture through hard surfaces, including through most threats he encounters.

Not much has been said about Exploit's alternative methods, but all that is mentioned is that this form can rupture the sky, creating unnerving feelings that stun nearby opponents, making them easy targets. In addition, it is unknown whether Exploit can access this form at will, or if a certain event has to occur.

Temporarily, Exploit can absorb nearby data, completing his body, removing most of his weak points, essentially, boosting his defense. However, the data he absorbs never matches with his own, making it temporary as mentioned before. As mentioned in chapter 1 however, the data may result in an unstable outburst, forcing this ability to be used with caution.

In addition to data absorption, Exploit can also create illusions based on the code gathered, whether it be a person, object, even false attacks primarily used to distract the opponent.

An ability unknown to Exploit himself, it allows for Exploit to return back to life, only occurring after being fatally wounded or killed. However, the cost of being reincarnated is that his memories are entirely wiped, not remembering a single thing of what previously occurred, as well as forgetting who was once a threat, and who was once a friend. In addition, his appearance changes each time, which doesn’t usually affect his stats. Despite all this, it is possible to save Exploit from reincarnation, given proper magic or medical equipment is provided.

Given that they have only met once or twice, there is insufficient information regarding the two, unknown whether they were friends, or enemies.

Quite similar to his encounter with Error 404, little information is given. However, There is something about Virus 404 that Exploit seems to despise.

Recovered Exploit by building him new arms, as well as being responsible for keeping him alive as he is aware of Exploits unknowing reincarnations. 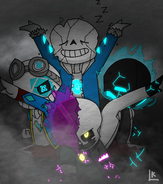 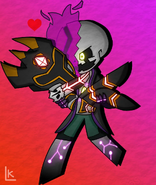 Another full body picture of Exploit