Right is blank, left is purple.

"The Multiverse fell long ago, my purpose has been nullified; but I will not give up like the other old-timers.

And when the time is right, I will step in once again."
– Fallen!Symbol

Fallen!Symbol Sans is a futuristic version of Symbol!Sans created by Feartheunknown2104. In a future envisioned by splatforce, the Multiverse has been largely destroyed by major glitches. The old protectors and destroyers like Error!Sans and Ink!Sans have been cast aside for new ones like Radiant!Sans and Regret!Sans. The "old-timers" still exist, however. They are just somewhat different. Fallen!Symbol is the blending of Symbol!Sans and his other form, Level!Sans.

When the catastrophic event that caused massive damage to the Multiverse (to which I am going to refer to as the Catalyst Event) occurred, Symbol!Sans's AU (The SymbolVoid) collapsed on top of him. He escaped, but in doing so split himself in half. To survive, he was forced to merge with his other, soul-less form Level!Sans. They became permanently intertwined as Fallen!Symbol. He has come to peace with the fact that he has lost his purpose as a protector, and has resigned to travel the Multiverse. He watches the Multiverse recover, seeing its new inhabitants rise and old ones fade. He has taken particular interest in the new destroyer, Regret!Sans.

Fallen!Symbol's right half somewhat resembles his old form, with a purple hoodie, black shorts and red slippers. The scar on his right eye has widened considerably at the bottom. His left half is pure black and inconsistent in shape, much resembling Nightmare!Sans's body in both material and appearance. His left eye appears as a glowing purple circle.

Fallen!Symbol prefers to be left alone. He enjoys being by himself and his thoughts. He speaks in a well thought-out, intelligent manner and doesn't mince his words. He fears very little, and will approach every situation with a mixture of caution and patience. It doesn't take much to get him to fight, but he usually never kills his opponents. The only exception to this is when he is faced with Error!Sans and/or Nightmare!Sans, or if his life is truly in danger. He watches the multiverse out of a feeling of obligation, protecting only those that he believes will be useful contributions to the multiverse. Those who he protects never know that he is doing so unless he wishes for them to. One of the few beings he does protect is Regret!Sans, the new Multiversal destroyer.

Fallen!Symbol secretly protects Regret!Sans, seeing him to be vital to the future Multiverse. "The Multiverse is self-perpetuating. This reality needs somebody to keep it in check, not expand it." -Fallen!Symbol 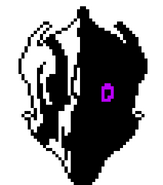 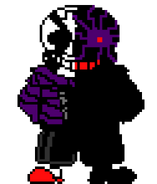