Undertale OC Wiki
Register
Don't have an account?
Sign In
Advertisement
in: Articles with poor grammar, OCs, Recurring,
and 3 more

Flamey is a Cat/Goat monster OC created by Weeb Umbreonchan. She's a neglected monster who can be found in the garbage dump within the waterfall, far outside of her home in the hotlands. She currently have a crush on a certain flower.

Flamey was born as a hybrid. When she was about 8 years old, she was abused by her parents, and sometimes by others she doesn't know. Due to this, she decided to end it all by hiding outside her home, in places like garbage cans or big piles of dirt. It was quite boring though, so she decided to train herself to be able to fight and stuff. She didn't usually fight people after that though, because she shows more of a soft spot to others, and promised herself that she only does it to enemies.

Flamey is a weirdo who doesn't know why, but in love with Flowey.

After the protagonist spares her, she starts acting nice. She also visits Temmie Village, where you can talk to her after battling her and then going back to the village.

Despite getting insulted by Flowey, she does like him. The reason for this is because she finds his evil personality cute. She met Flowey after actually meeting Toriel. She wanted to get to know the Ruins more, and after going through puzzles, she met Flowey. Everytime she visited him, she would talk alot.

She first met Toriel when she visited Sans, the three shares a love for puns. They call themselves "the pun trio" because of this. 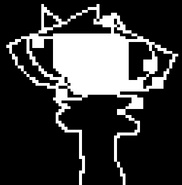