Undertale OC Wiki
Register
Don't have an account?
Sign In
Advertisement
in: Pages without a standard infobox, Articles lacking sources, OCs,
and 3 more

Depending on the host itself.
Fresh is a parasitic Out!Code Created by CrayonQueen/LoverOfPiggies. Originally conceived as a Joke character, they later went on to become a parasite that travel across the multiverse. Upon possessing their souls, they turned their hosts into a Vibrant Hip versions of themselves; as if the parasite is the concept of UnderFresh itself. The most common victim seems to be a Sans of shorts.

The victims of the parasite were transformed into a vivid mess of the aesthetic of the 1990s. Prime example was with Sans, as he’s often depicted with his clothes becoming vidid and and bright, and sporting a bright red cap backwards. The most common sign of possession lies in their YOLO sunglasses, which hides the infected soul that been slowly drained by the parasite.

The parasite itself appears as a purple semi-star shape parasite with 4 arms, with a mouth in the center. Said mouth has sharp teeth and within it were a single yellow eye with red pupil.

Due to their programming, they’re unable to feel any emotion other than fear and rage. However, their host often display a lax attitude and to have a go with the flow type of personality (then again, this was due to their apathetic nature of it all). Their fear was more of a survival instinct, and they often transfer from one host to the next to continue their existence. As a parasite, they leave their hosts intact; as they wanted to leave as many bodies ‘open’ as possible for later possession.

They’re very blunt, and where oblivious to their own action sometimes; even going so far to reveal the truth before they even realizing it. They’re very sensitive to language however, and will censor any vulgarities when they got a chance. 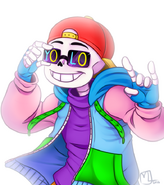 Fresh posessing Sans, his most common appearance. Created by Little-noko