The Canine Faction and Unit

Grandoggo, real name Muttler, is a recurring character created by TheEccentric1851. He's grandfather of Doggo, and the oldest member of the Canine Faction. While being old, he is still a skilled member of the Royal Guard, despite being unable to see things that move.

Grandoggo has the same fur color as his grandson Doggo, but with patches of grey, and he is more scruffy with his age.

Grandoggo used to spend a lot of time with his grandson, teaching him how to fight and to smoke dog biscuits. 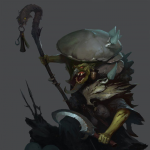