The god of Pain, Pain.

Food, Dogs, Money, Pain (from others)

Red
H Sans is a Sans out!code created by TOR Sans. H wanders the multiverse, looking for friends and people who experience pain, to give him more power.

H wears a leather jacket, without a hood, and a red shirt, with black and red socks. He wears monster slippers, but switches his slippers for shoes, normally. He also wears dark shorts as well as having black hair, with red eyes.

H is very sarcastic, and smarter than most people, often making fun of people, or pulling pranks on them. H is also very sensitive about himself and his life, which is why if anyone insults him, he will try to automatically kill them. H can come off as creepy to some people, due to his smile and eyes.

H has a special relationship with MoniTOR Sans. MoniTOR Sans was once assigned to destroy H's universe, but he lost against H. MoniTOR Sans is not scared of H, but rather, a friend. After MoniTOR Sans apologized to H, they became friends. 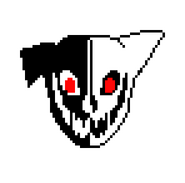 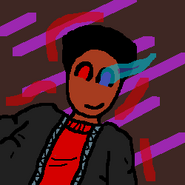 A picture of H Sans in battle Created by TOR Sans
Community content is available under CC-BY-SA unless otherwise noted.
Advertisement