His brother and the AUs

Bullies, people killing his brother, and Kinda Ink!Sans and Error!Sans

As HaCkEr: In HaCkErTaLe when killed by FireWall

In his house when he was alive.

Male as HaCkEr and when Alive.

Black and White
HaCkEr is a character from HaCkErTaLe, HaCkEr was created and made by thesharkboy or TSBY. And HaCkEr is an Out!Code that uses portals to go to AUs.

HaCkEr was alive and his name was Kris, Kris was an expert Hacker, then one day he was Hacking though a firewall, the firewall threatened to kill Kris and Trevor (TrEv.ExE real name), which both of them were in the same room, then when they didn't believed in the Firewall, Kris still trying to Hack it, then both Trevor then Kris got killed by the Firewall, To see the entire Backstory of how HaCkEr died, here is the Google Docs of the Backstory.

His appearance is mostly Black and White everything is but his skin color, his skin color is tan like a normal human, but he is not an human nor a ghost nor a monster, he is an HaCkEd.

Sometime he is nice and sometimes he is not too nice.

And the characters includes all Sanses, Papyruses, Charas, Frisks, Undynes, even many OCs.

And the characters excludes the Inks and Errors.

And cannot get his soul stolen from Error. Nor can be colored by Ink

HaCkEr's Brother, HaCKEr loves his brother very much. And TrEv.ExE is a Demon.

HaCkEr's Kinda Enemy, Error do not like HaCkEr that much, but HaCkEr don't have anything against Error through.

Anyone can add Pictures in the Gallery for HaCkEr (Nothing negative please?). 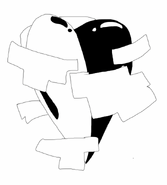 Made by Creator William
Community content is available under CC-BY-SA unless otherwise noted.
Advertisement