Undertale OC Wiki
Register
Don't have an account?
Sign In
Advertisement
in: Articles that need to be improved, Pages without a standard infobox, OCs,
and 4 more

The King of the Underworld

Red
Inferno!Sans is a Out-Code created by Keion15. Inferno Sans serve as the God of the Underworld. He watches over the Dead Souls in Underworld, He was one of the Many Gods that bowed to King Multiverse.

Inferno Sans was a Sans that was born in the Underworld, He serve as the God of The Underworld and He watches over the Dead and Souls in the Underworld, Later when He wandering the through the AU's he met Ink and Error. So then he became good friends with both of them and He like to talk with them time to Time. When King Multiverse arrived he became King of the Multiverse, So without a question Error,Inferno and Ink bowed to Him. So they and the rest of the gods became Servants.

He is very Calm and Chill, He often's visits Ink and Error, He like to talk with them a lot. He really don't like King Multiverse because He didn't want to Bow to someone he didn't even know, But he still respect King Multiverse. Inferno also like to Hangout with Reaper sans and Reaper Papyrus because since they are the Gods of Death. He seems to get along with Reaper!Sans the most out of the gods in the Multiverse, Inferno does enjoyed drinking lava and he likes to read books if he is very bored.

He wears a Flame suit, He also have Black Fur and He also have Red Eyes. Fire can be around his hands and his body.

He is very weak to Ice and Water Magic, Which can damage him a Lot.

He met both of them when He wandering through AU's, Soon Later He became Good Friends with Both of them, He sometimes hate when they argued too much but He can deal with it. He sometimes like to crack Jokes with them.

He dislike King Multiverse because He had to bowed to Him even those he did't know, But he still respect Him even if he don't like him that Much. He was given the title god of the Underworld and Dead, Same with the other Gods as well.

Inferno met them when they was taking Souls to the Underworld, So then they met Inferno soon they became Friends with Inferno Sans, Later they also talk to each other every once in awhile.

He met Seraphim sans when he was traveling through AU'S, Soon they became good friends. They often visits each other, If they are Bored.

When he was in the Underworld, He sense a lot of Deaths soon he knew who was causing them, Infected the First the Destroyer, So now Inferno is hunting him. 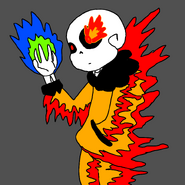 Made by Alterna Team 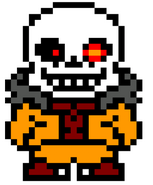 Made by Alpha on Discord