1,55cm
Jample (pronounced /ˈjuhmpaa·pl/) is an recurring monster created by Jmoschino08. He is a mime-like monster that appears in the CORE during Hard Mode. He is most likely a stronger counterpart of Madjick found on the mode, though they both appear to co-exist there.

Jample's appearence is highly similiar to a mime, similar to Migospel's appearence. He has a spherical orb-like head, with black lines crossing his closed eyes and a round nose. He also doesn't have a mouth. He wears a ruff, short puffy pants, stockings and long and round shoes. His hands, covered with gloves, are disconnected from his body and float close to him.

Jumple frist appears to act in a brash and blunt way with the protagonist, mocking they for their "static, eerie behavior". As his names suggests, Jample likes to bounce and jump during his battle, having as his main purpose is to encourage the protagonist to jump around as good as he can. He can be easily spared after "bounce" ACTs, later being happy and motivated with the protagonist acts. 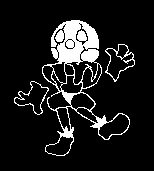