K. The Rainbow Demon is an Out!Code created by Karoleus_PL. He is a Human like Monster/Demon who fought Frisk in the Genocide Route, only to be sent to the Void. He was later founded by Ink, and gained the ability to roam the Multiverse.

He was born in a dark place. Place had no walls, no ceiling, only floor. Floor was made of a strange black goo. When he arose, he was already a rational being. He was a little scared. He dont see anything. He just felt him moving. He decided that he would start walking forward. As he walked , he heard whispers around him. He was afraid of them, but he tried not to show it. After some time of wandering, he saw a light, it was shining colorful. he quickened his pace. he wanted to get to that light as soon as possible. Light was be a ball, Black inside and the colored border . He felt a great desire to touch the ball. He didn't know why, but he just wanted to touch her. Until he finally touched the ball. His body paralyzed and he began to see flashing colored lights before his eyes. He didn't know what was happening until he finally passed out.

He woke up in a small town, there was a lot of snow. He was surrounded by creatures, he called them monsters. Although they were not aggressive. There was one tall skeleton there. the skeleton helped him up and K. asked Where am I? to which the skeleton replied In the Underground!

He had been in the Underground for a few days, With him appeared a small cat, which he named Bon. Skeleton he met name was Papyrus. Papyrus have a brother was called Sans. He lived with the skeletons in the house because they had a spare room. For a few days he found out what he looked like and found out that his soul was specific. They all had white souls, and he was the only have black soul with a colored border. K. discovered Bon are connected with his soul. He met the Royal Guard, who taught him to fight and use magic. Her name was Undyne. She was impressed by his power.

K. lived in the UnderGround for about 5 months when a Human fell there. His name was Frisk. Human went through the whole underground, he didn't kill anyone. He reached to the end of UnderGround and everyone waited there, including K. . Human defeated Asriel, and left UnderGround.

On the same day, when Human left  UnderGround, when K. went to sleep, something suddenly happened. K. got up from the bed and left the room. He looked at the calendar, and almost fell over. The calendar was set to the previous month.
He thought maybe perhaps Papyrus had changed it by accident, he thought. K. Ask Papyrus if he has changed anything on the calendar. Papyrus replied that he was not moving anything. As Sans looked at the bookman, his eyes turned black. He asked if something was wrong. K. and Sans replied that it was all right.

They locked themselves in the room. Papyrus stayed in the kitchen because he was cooking spaghetti. They started discussing what might have happened. Sans told about his old experiments and experiences. Determination, a soul capable of resetting the timeline. While they wondered who might have this power, Papyrus left the house to scout. When they left the room, they noticed Papyrus was gone, and they quickly ran out to look for him.

K. was standing behind the sans, they were on the lane at the entrance to the waterfall. Sans, knelt over some dust, and held a Papyrus scarf.

K. and Sans were standing in the yellow hall. It was in the king's castle.Sans was wearing a Papyrus scarf. K. had Bon on his head. They heard footsteps.

It was a Frisk.

It's a beautiful day outside.

Birds are singing, flowers are blooming. . .

SHOULD BE BURNING IN HELL!!!

fight began, died and was reborn over and over again. Sans began to tire. Until the knife caught up with him...

K. held in hands crumbling sans. He told him his last joke, then he melted away. K. seeing Sans turning to dust, fell into a Rage. His movements were too fast for Human, after a few dozen seconds, Frisk died, but before he was reborn, K. jumped on him, tore his souls away and used soul power. But it did not go as he wished it. Soul of Determination, connecting with K. Soul , emitted so much energy that Timeline was removed. Only he and Bon remained.

after sitting in the void for a few days, a certain Sans found him. But he looked completely different, the only thing he had in common with his Sans was that this Sans was also a skeleton. He introduced himself as Ink. Ink took K. with him and they left the void together. Ink, taught him how to move between Au's, and warned him about dangerous guys. After which K. left Ink...

K. is bold and playful. Sans had taught him a lot of jokes. It also happens that he is not careful. He is an Optimist. It isn't difficult for him to meet new people or monsters, but only few have his trust. Hardest to find out its about his past. Only person who he has been told, is Ink. He learns very quickly, Ink taught him to teleport in only 3 hours. Though his Personality is bold and scared of little. His Biggest enemy is SPIDERS. He didn't like Muffet very much, it was even worse with her spiders

While still in the UnderGround, K. lived with Sans at home. They were friends.

Like Sans, They were friends and they were lived in same house.

Bon is his pet and it is tied to K. soul. Bon is probably Part of K. Soul.

Ink saved K. from the void. He taught him how to move between Au. K. considers Ink his saver. 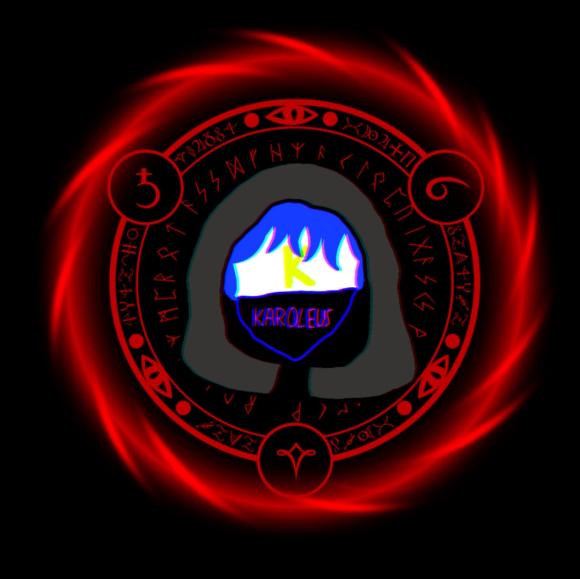