Undertale OC Wiki
Register
Don't have an account?
Sign In
Advertisement
in: Articles with poor grammar, OCs, Moderators,
and 3 more

MoniTOR Sans is an Sans out!code created by TOR Sans. He's a Sans from the AU UnderTOR, where Monster technology advanced thanks to the meteor that crashed into the underground. He was originally a normal monster until he got involved with an accident that ended in him having a monitor for a head.

This version of Sans serves as a lab assistant, where he helps Alphys with technology, research and experiments. One day, a meteor with metals and highly advanced tech, crashes in the underground monster civilization and the scientist go to inspect. A robot, similar to a human is inside and so is highly advanced tech. Sans destroys the robot right where it stood while everyone else took stuff to the lab or returned to whatever they were doing. With this new technology and the metals harvested from the meteor site, the monsters start to get more advanced over the years. Alphys, curious to learn more, builds a TOR (Total Omniscient Recreation) machine with every data sample or computer found from the meteor site and the underground. The machine fails but Alphys is too determined to stop. As she turns on the machine, Sans walks past with a computer, and trips decapitating his head, but replacing it with the computer monitor. Sans falls into the machine, and it explodes, giving life to Sans after he is decapitated and also giving him further advanced knowledge. Soon after, a human falls into the underground, killing most of the now MoniTOR Sans' friends. MoniTOR Sans immediately kills the human with a single attack, absorbing their soul right after. With Sans' knowledge and power he continues adding and adjusting augmentations to himself. He knows more of the world and finds a way to transport himself to different timelines and universes, killing powerless Aus and only leaving worthy ones. He returns to his home to find out another human has fallen down...

He gone through numerous augmentations that the only thing that resemble him were his Jacket and Shorts (despite them being a different color than the original. He's well recognizable through his Monitor Head.) MoniTOR Sans also has a ripped shirt, due to it being cut in fights and scraped by metal.

This Sans is more hard working in comparison to the original. He has a entity inside of him referred to as "System" which causes him to become more hostile and agressive, acting as a second form of determination as well. To his friends, he is light-hearted, often helping them as much as possible. He rarely can get offended, but it happens often when making fun of his augmentations. MoniTOR Sans actually comes off as nice, and normal at first contact. He doesn't automatically kill targets, but rather gets to know them first and MoniTOR Sans doesn't harm his friends, even if he is required to. MoniTOR Sans loves Giftmas/Christmas, and goes as far as dressing up as Santa during the holidays. MoniTOR Sans is usually neutral to people he meets, unless they trigger System. System can take over MoniTOR Sans' mind and body if he is extremely angered, which is dangerous, as it can take days for MoniTOR Sans to take back over. 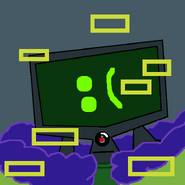 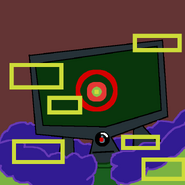 An evil version of MoniTOR Sans Created by TOR Sans 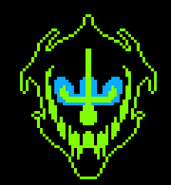 The gaster blaster of MoniTOR Sans Created by TOR Sans

A glitched out version of MoniTOR Sans. Created by TOR Sans
Community content is available under CC-BY-SA unless otherwise noted.
Advertisement