Port (most people)
Anomaly (Error, who else?)

Murder (Unless they deserved it!)

Just white dots where his eyes would be

"The void could have been a place of happiness! You just HAD to ruin it, didn't ya?"
– PORTaLOS

PORTaLOS is what most people would call an Out!Code, specifically a protector, as he protects AUs and their people. Him, being a voidil, originally had a monster SOUL. Due to traumatic events in his life his SOUL became justice, and he vowed to punish those who commit genocide. He works for the multiversal council to help with his goal. If you try and destroy an AU, chances are he might be one of the ones you'll be facing.

The first person PORTaLOS met from outside the void was Broken!Justice, an insane version of Justice!Sans, who's assignment was to kill all those in the void. PORTaLOS, being childish at the time, only informed them of how it would be hard to quickly get between places in the void without having a way to travel quickly.

He met this Broken Justice various times throughout this genocide, trying to convince the sans to stop, but he didn't and PORTaLOS was tortured for trying to stop him.  This caused PORTaLOS' SOUL to turn over and become justice, causing a bright light, made of pure justice, to appear, killing all the CORRUPTION clones there at the time.

The sans escaped as this happened, and PORTaLOS thus vowed to stop all those who caused genocide, and resolved to make B!J understand the consequences of what he did, and to see to it that he felt genuine remorse for his actions.

When PORTaLOS was 376, Deltarune was discovered, and PORTaLOS was sent to investigate. PORTaLOS had the regular Jevil fight, until Jevil cut off his hand. This was unexpected.

PORTaLOS, his hand replaced by a bleeding disk, opened a portal to the hospital in the Capital of the Multiverse, where he got a robotic hand to replace his normal hand.

This is why he wears gloves, so that people don't know his hand is metal, there would be a lot of explaining to do.

PORTaLOS wears a black coat, boots, gloves, and a belt which carries his tools, these tools happen to be a CORRUPTION Detector, a Glitch finder, a Deployable Blaster, and a stun gun. If you take off his right glove you will find that his right hand and forearm are metal. The image in the infobox is a drawing of PORTaLOS' badge. His head is white, and his eyes have black outsides with circular, white pupils on the inside, He also has no hair.

PORTaLOS is calm, usually hard to make angry without diving into justice in some way, he is asexual and has no interest in a sexual partner, he explores AUs in order to collect information as he likes writing books.

Justice!Sans is a good friend of his, being another person who has a justice SOUL, they often get along.

He happened to hate this sans when they did eidocide in the void, however when he broke free from the control of CORRUPTION they became friends, bonding over their shared hate of CORRUPTION.

CORRUPTION is the nemesis of PORTaLOS, as it was him who ordered B!J to invade the void, on various occasions PORTaLOS has attempted to destroy corruption, and was one of the happiest people in the multiverse when he was destroyed.

PORTaLOS doesn't interact with AD!Chara a lot, despite this they have a friendship, PORTaLOS was a guest AD!Chara and Sakuras wedding and had a nice time there.

Speaking of Sakura, PORTaLOS is also good friends with Sakura, he visited Sakura and AD!Charas wedding and, as mentioned before, had a nice time there.

Despite being from a different franchise, PORTaLOS has had encounters with the large robot GLaDOS, and doesn't like them at all. 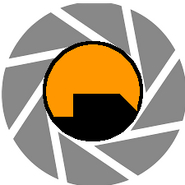