5'0
Pace Switch is a Wandering Out!Code created by TOR Sans. He's a Skeleton Monster who came from a AU were the Monster Human war never occurs. He was punished for his sins, yet he escaped this torment with the gift of knowledge.

Not much is known about Pace Switch. In his Universe, monsters were never in conflict with humans. Pace Switch accidentally kills a human, causing monsters and humans to torture him for eternity. He then comes back with a very high amount of knowledge. Some say that he encountered a angelic being which gave him the gift of life and knowledge.

Due to being tormented and abused, Pace switch has many wounds.  His exposed brain is a red and blue hue, and due to him being corrupted, he has veins and warped areas on his bod and clothes. He does not wear a jacket like a majority of others, but rather a large white shirt. His right hand is replaced by a shape-shifting entity, that typically takes the form of a tentacle. His lower jaw is missing and his skull is cracked around the opening.

Pace Switch's Personality is more sinister and serious. He doesn't typically laugh at jokes and is more insane than others. He often visits  other AUs for fun and is very hostile or agressive when anything about his past is mentioned. 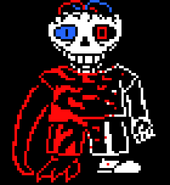 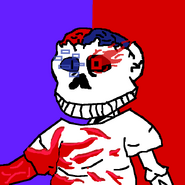