green and yellow
Save!Sans is a Sans variant created by Phoenixelh.

Its goal is to copy as much AU code as possible to keep track of it, as a form of security because its own AU has not been so lucky. Thus, it can restore the code of an AU to an earlier point in time if it has a copy of it when the code are corromp (it restores it).

He can copy/paste certain part of a code elsewhere, he uses it in particular to fill out his SaveVoid.

Save sees himself more as a collector than a real protector although he is really good.

He no longer has a universe because his has been corrupted and deleted by the player.

The player has modified his saves and game folders to be able to do all the endings without having to cross Chara.

Except when restarting the game after a genocidal route the game crashed and refused to restart, then a blue screen appeared damaging his computer.

Sans then got stuck in the files of the player (his computer). After some adaptation time with computer peripherals, he was able to escape and fell into our internet by discovering our world, Undertale and the multiverse.

He remembers the different roads perfectly and what he has been through and hates all the players who have practiced a genocidal route.

Traumatized by the loss of his universe, he is obsessed with the idea of ​​saving AU data to avoid any loss ... He therefore travels the multiverse in order to save the AUs by copying their code. (The more AU he copies, the more marks there are on his bones and clothes, these marks can move on his body).

He often sorts the copies he owns, to keep the ones he prefers and to store the others in objects linked to the AU in question.

Save has its blue skeleton following its assimilation with the computer components in the SaveVoid. His right eye is black with the yellow  iris like save mark and his left eye is white with a green iris.

Save wears gray / brown harem pants. He has black, white and green slip-ons.

He is wearing a green t-shirt with a kiwi (bird) design on which it is marked KIWI LIFE.

He wears a black and dark green sweatshirt.

Random marks form on his clothes and bones every time he saves an AU in his own code. This is what he does with his favorite AUs and the ones he finds interesting. These marks can move and are not fixed.

The more he has, the more code is stored in him and the slower it is. The less it has, the faster it is (light speed).

He is curious: he is a born researcher, he wants to discover new things in order to maintain his interest and not get bored.

Lazy: he will not intervene in conflicts (with error for example) he will act as an observer and preservative, he intervenes if he has no choice and in this case he will then erase the memory of the person. Because he is afraid of causing more damage by intervening. But to save someone's life he will do anything.

Cynical: he likes rhetoric a lot the well-placed jokes, he will tend to launch a joke and wait for the reaction of his interlocutor: he adored seeing papyrus react quickly to his jokes.

Insightful: Having an overview of AUs, our world and having enormous knowledge, he easily identifies difficulties and solutions to problems

Frank: hates lies, meanness, and considers it better to say things. He considers that his lack of communication prevented him from saying things to his brother and regrets this attitude today.

Impatient: can't bear to wait, in all aspects of his life, when there is something that needs to be done it has to be done now. "what is being done is no longer to be done" This is especially the case when it copies the data to a big AU. This him from doing anything else and because of this he can  rethink of unpleasant things.

Generous: if you are in his intimate circle, he loves to share his knowledge, talk about what he discovers from the multiverse. He would be a  loyal friend. But beware, having a very good memory, he is will remember forever something that will displease him. He can be resentful.

Compassionate: feels the pain of others and understands it, when an AU is destroyed and someone finds himself alone for example, it reminds him of his situation. He will help if he is in his power.

Stubborn: he's always right and that's elementary! he has difficulty in questioning this because of his knowledge, it is difficult for him to admit that he is wrong

Can be cruel: when you remind him of the genocidal route he lived and the loss of his brother, he can get into a ferocious rage to the point of being sadistic and reviving the greatest fears of his opponent: "the psychological violence is often the most effective"

Whimsical: in some discussion can go from rooster to donkey, he can very well come back to a fact of a discussion of several months ago because for him it will be as if it were yesterday. Having spent  long years alone, he has trouble adapting his flow of emotion, which can shift from fear to anger or joy. He is able to get annoyed easily if pushed to the limit.

Thanks to our media / internet (to us players and creators) he knows most of AU and knows most of their characteristics. He has no official relationship, it varies from story to story.

He has fun with what the creators do with his character. 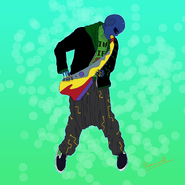