Green, Dark Green and ███████ ████
Software Breaker is an outcode created by Mysware. He was created to be the destroyer of Outerverse. he's past is full of revenge for being thrown away and aims to destroy all softwares.

When the first AUs were being built, empty software that nobody cares about was thrown into trash bins and cleaned, a realm was created to prevent these garbage software from falling apart and started to be thrown there. After many years, many of the countless infinite unnecessary software began to rebel and unite so that they could be saved with a single body. But something went wrong, after the merger they turned into a very strange creature and tried to separate, even if it was painful, they finally managed to leave but not quite. Thanks to this, 2 different creatures were formed and they were organized, but now they had a single will instead of the free will of software. Two of them looked at each other, one of them had a lot of warning signs around him, and his eyes were warning signs and green, wearing red, and the other was whiter and one eye covered like a fence, the other was faulty. They were afraid of each other, but then suddenly they screamed, they both started shouting about freedom but did not know the way out. The two bonded quickly, but there were personality differences between them; The red creature was more hasty, hating its past and thinking darker, while the white creature was more optimistic and naive. After more conversation, they began to test their strength even when they tested on each other, the creature in the red suit had already grasped very well, but the creature in the White suit was more inexperienced. In the end, they thought of a name for each other; the creature wearing a red suit would be called "Software Breaker" and the creature wearing a white suit would be called "Alpha Computer". While this was happening, Software Breaker began to contemplate and discuss their past lives, Alpha Computer understood him but found him wrong, yet he did not want to say his wrong discovery because in general he does not want to break Software Breaker's heart. Within a few weeks they decided to get out of the Trash, Software Breaker would go first because they don't know what dangers await them outside. Software Breaker managed to come out.

Software Breaker was in a .. ship? it seemed to move and swing, and there were a lot of boxes around it. Although he was a little startled, he got out and realized that they were really on a ship, there were a lot of pirate monsters and a sans driving the ship, it was very loud and Software Breaker was disturbed by this and immediately ran to the sans. When Sans saw him he was shocked and immediately realized that he was not here, Software Breaker was unresponsive, disappointed by the AU's look like this, the bigger thing is that like him was thrown into the trash and that such software would survive, he got so damn nervous. He grabbed his head and leaned to the ground, his anger began to take hold of him, the sans of the Universe made this awkward and approached Software Breaker, as he reached out to him Software Breker went mad and punched Sans in the middle of it, sans suffered mortal damage and flew out of the room and flew into the middle of the deck. Software Breaker was staring madly and was suddenly surprised, he went mad with this power. As for Sans, his life-threatening was very high and he would die in a few minutes. The pirates moved nervously to Sans' room, Software Breaker was puzzled about what to do, but he was still mad and fainted there. When the pirate monsters entered, they thought Software Breaker was dead. Software Breaker suddenly teleported to the middle of the deck as he grabbed and prepared to kick him off the deck. He stepped on Sans's dying corpse with his foot and turned it into a cannon, the Pirates got furious and attacked Software Breaker. Software Breaker took fast strides, dealing fatal damage to them with one punch and neutralizing them. All the pirates slowly died and eventually collapsed the ship. Software Breaker's current aim was to destroy the universe, and that would be easy. A blaster covering most of the space suddenly appeared in the air, even though Software Breaker had covered the entire universe with strings, it had already left the universe and the Blaster fired. Software Breaker has since turned into a ruthless destroyer. He told Alpha Computer what happened, and Alpha Computer would help him on this mission.

Software Breaker is wearing a red jacket, surrounded by a lot of warning signs, and red strings running from his eyes. His eyes are green and his pupils are warning signs.

Unwilling to remember his past and full of vengeance, he thought his life was normal when he was thrown away, but when he traveled through the universes he remembered that it was injustice, his brother and software like him were being thrown into the trash and ridiculous software was freed, which was injustice for him, so he would destroy all unnecessary software forever. Generally he is a bully, rage, very cunning and mad, love is fun for him, fun is just allied with destroyers. He has a separate relationship with his brother. He hated all of the guardians and wanted to turn these garbage universes into real garbage.

Software Breaker acts as the executioner of the Infinitey code. He is very happy to work for Infinitey Code because he has a lot of fun with it. But he doesn't listen to Infinitey Code very much.

They are best friends with Omni-Breaker, they destroy universes and hang out together. They both value each other and sometimes hate each other.

They are good allies with Virus404, they go on Infinitey Code's missions together.

While Software Breaker was destroying Glitchtale, he encountered Bete, Bete attempted to kill him, but that was insufficient and ridiculous. He easily killed Bete with the True Absolute Reality Ray.

Epic Dust confronted him and scorned him, and Epic Dust thought he could kill him easy, but suddenly felt like a big punch, flew far and finally died.

He knew he could easily defeat anti-virus, but let him go for fun. He will kill him the next time.

He bullies Error Sans because Error Sans is too weak for him. But he helps him a little sometimes

He can easily kill Ink Sans, but he never does as this will be very boring.

He hates the classic sans so much that he is dying to kill him every day, if he had the opportunity he would have killed him already.

Since the Omni404 couldn't overcome him, he couldn't destroy him and they became friends, Software Breaker likes to hang out with the Omni404.

The whole team of bad guys including the nightmare is his puppet, he let their lives for fun and can delete or activate their free will at any time.

Core Frisk interferes with his work so he hates him/her terribly. 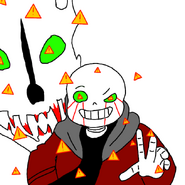