Undertale OC Wiki
Register
Don't have an account?
Sign In
Advertisement
in: Articles with poor grammar, OCs, Monster,
and 3 more

View source
watch 01:54
Obi-Wan Finale - The Loop
Do you like this video?
Play Sound

Protector of the innocents

Vos Sans is a protector OC made by Admin240. He is a Sans from Vosetale, where he has been experimented on by Gaster to persist beyond death. He's now traveling the Multiverse to steal the Book of Travels from the Nightmare Gang.

Vos is a powerful opponent but he wasn't always like this. VGaster made some experiments on Vos to give him strength and ability to not turn in dust when he dies. He can technically come back after dying. But instead to turn in dust he can turn in to a statue. The experiment after nightmare and Killer got in Vosetale using the book of Travel. Nightmare gived Vos the offer to join him, Vos refused him offer so Nightmare tore Vos in two with his tentacles. The experiment used a bit of 8 human souls (the humans are alive in Vosetale) and a small particle of hate. VGaster gives him a mission to get that book from Nightmare and got the adore books.s.

Vos is a guy who likes jokes and likes to punish everyone for his amusement or dexterity. You are like a god of war. Vos is a big liar and steals from time to time. Vos is not afraid of many, but Fatal and Infected make him shiver. He is the type of guy who is hiding his pain whit a smile, was bullied and they always told his how useless he is, and may be the couse why he likes to be useful.

he can summon his weapon(spike), if you are hit by his weapon you can get serious damage .

Resurection: He can come back after dying

Vos_Blaster: he can summon his Vos Blaster

He can do exactly what every Sans can do.

"spike" (a double scythe): he can summon his weapon(spike), if you are hit by his weapon you can get serious damage .

Vos absorbed a bit of the power of the books

Papyrus = little-Brother: He likes to anyone him. Vos is always protecting Papyrus innocents.

Gaster = father: the overwork father. He really needs a break

Undyne = Friend: Papyrus presented Undyne to him then they were little. He doesn't like the bad influence on his brother.

Alphys = Friend: Anime buddy (he also meet her along with Undyne). They were in the same collage.

Chara = friend: He is happy she is not like the adore Chara's but she can be mean. He does not know why she hate humanity, every time he asked that she started to play whit the knife

Frisk = Friend/(Love interest): Him and she had a serious relationship (they are still together). Vos is aware the fact Frisk is seeing her brother (Kris) ghost

Asriel = Friend: He need to stop drinking coffe. they were good friends then they were kids.

Asgore = Friend : A nice guy, a bit scared that Frisk step father. He is secretly sole some flowers for Frisk. Agore need Vos help to get some informations about adore Asgore's mistakes, he doesn't want to do the same mistakes.

Toriel = Friend: he like to made puns whit her, a bit scared that Frisk step mother. Vos thinks that with his jokes he wants to get along with her, to allow her to date Frisk. (Why I can't put more images or links)

Mettaton = Friend: He helped Alphys to make that robot, he finds Mettaton self admiring annoying. Vos does not apreciate the fact he invited him on the show just to get banned.

Betty Noire = friend: A little annoying 16 years old girl. Vos does not understand why she loves loley pops so much.

the Multiverse (out side vosetale)

Nightmare = enemy: The Deity who killed Vos once, only for him to revive and swore revenge.

Dream = friend: Since they share a common goal, he helps Dream on his quest to defeat Nightmare in exchange for the Book of Travel that he possess.

Ink = friend: He is helping Ink and the Star sanses with their jobs, but he finds Ink a bit suspicious and he don't understand why he drinks paint. Vos is finding ink a bit weird.

Error = enemy: A lonely mannitic sociopath. Vos finds funny that the Distroyer of AU's is watching UnderNovela. Vos has a saditic joy then he is sending Errror mad. 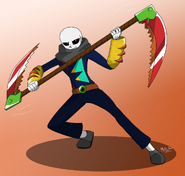 by CarlosLoquendo
Community content is available under CC-BY-SA unless otherwise noted.
Advertisement