""let's burn in hell together!" ~ What!Sans"
– What!Sans speaking to his foe.

What!Sans is a OC created by MrZephyr128. Formerly a Chara, they became a Sans through a reset in a middle of a fight. With his newfound powers they brought Genocide throughout the Underground.

One day when Chara was on a genocide run, they figured it out that maybe one way to beat Sans was to become a Sans, so during one of the fights Chara ran up to Sans and tackled him, during this, they reset the game. Instead of becoming a Sans, they were Sans (The current timeline). With all this power, Chara was now controlling his thoughts and actions, leading them to kill every single monster in the underground, including Papyrus.

He swore to destroy every AU; but one day, he found Delta! Sans and Firewall! Sans, and after a hard battle, they managed to kill him. 

What!Sans is your typical looking Sans, except about the part where everything else is different. He has red glowing eyes, which can only turn white if he gets emotional. (Which you will never see) From his eyes, a gray-like substance pours from out of his eye sockets. He wears a green jacket with a horizontal yellow stripe going across his hoodie, including the sleeves having the yellow stripe. He wears black pants with a brown stripe, following with darker brown slippers. His smile is bigger.

What!Sans is very cunning, ruthless, and unpredictable. He still has emotions from the original Sans and Chara's. If you talk about Papyrus, he would easily start to become weaker (easier to hit), but it would increase his attack. He loves chocolate but doesn't like ketchup. 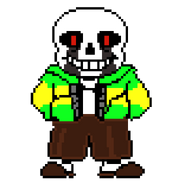 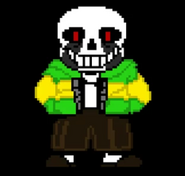